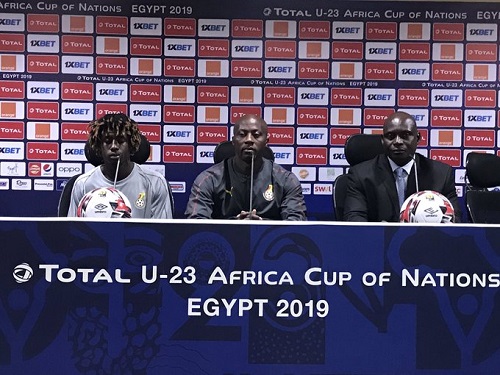 Black Meteors head coach Ibrahim Tanko insists the scoring draw game against Cameroon was a fair result for both sides and his focus now is on the match with hosts Egypt.

Ghana had to come from behind to earn a point in her opening game against the young Indomitable Lions after a barren first half.

The Cameroonians took the lead in the 59th minute after Frank Evina’s freekick curled in a free-kick from the edge of the box.

Asante Kotoko defender Habib Mohammed forced a shot in to draw Ghana level with just 3 minutes left in the game.

Speaking in his post-match press conference Tanko said: “It is a fair result for both teams. Now we will focus and prepare for our next match against Egypt”, the Black Meteors head coach stated.

He added that after going a goal down in the second half he had to make some tactical changes to avoid defeat in the opening match.

“We were a goal down and realized we needed energy in our midfield so I had to make those changes.

Ghana now needs a win against Egypt to boost chances of making it to the semi-finals and the head of the technical team believes the team can win on Monday despite the tough sides in the group.

“All the eight teams are strong in this competition are strong and our group in particular has strong and powerful in African football countries but we will We will Try our best to win against Egypt and stay in the tournament”, he emphasized.

Ghana’s second match against Egypt is scheduled to kick off at 6:00 pm.