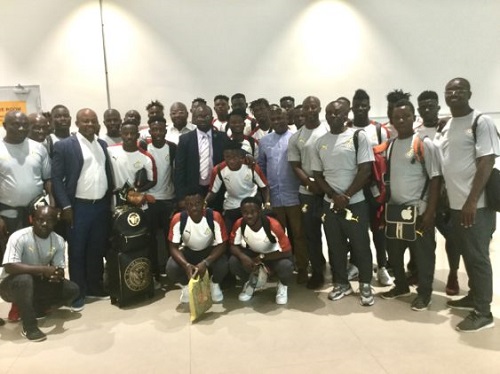 President of the Ghana Football Association Kurt Okraku has charged the Black Meteors to break the 16-year Olympic Games qualification failure in the upcoming U-23 AFCON to be hosted in Egypt which kicks off from November 8-22.

Kurt Okraku and some of the Executive Council members met the Black Meteors at the Kotoka International Aiport before their departure to Egypt.
In his speech, Kurt Okraku averred that team have the potential to break the Olympic Games jinx.

The GFA President also advised the players to listen attentively to their technical team throughout their campaign in Egypt.

A member of the GFA Executive Council, Randy Abbey, also urged the team to seize the golden opportunity presented them to make history.

The Black Meteors are in Group A alongside hosts Egypt, Mali and Cameroon. Ghana opens her campaign against Cameroon on the opening day before facing Egypt and Mali on 11 and 14 November respectively.

Ghana is seeking a return to the competition since its last appearance in 2004 in the Athens Olympic Games.