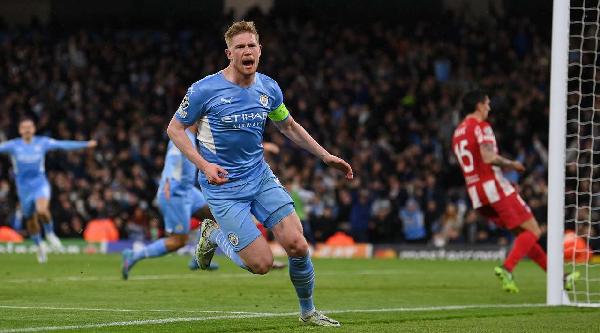 There was nothing to separate the two teams until De Bruyne, assisted by Phil Foden with his first touch off the bench, buried the ball past Jan Oblak to put City in control ahead of the return leg in the Spanish capital next week.

A clash of two European titans packed very little punch in the opening 45 minutes. City asked all the questions, but the impeccably disciplined Atletico provided all the answers. Bernardo Silva evoked the loudest roar from the home crowd when his penalty shout was turned down on 15 minutes.

In the second half, the intensity gauge was ramped up. With twenty minutes to play, substitute Foden picked the lock with his first touch, feeding De Bruyne who coolly slotted the ball past Oblak into the bottom corner, a decisive goal which gives City the advantage heading into the second leg.

Both sides must now switch their attention back to domestic duties. A huge encounter awaits Manchester City who take on fellow title challengers Liverpool at the Etihad in the Premier League on Sunday.

As for Atletico Madrid, they return to La Liga action with a trip to Mallorca on Saturday.