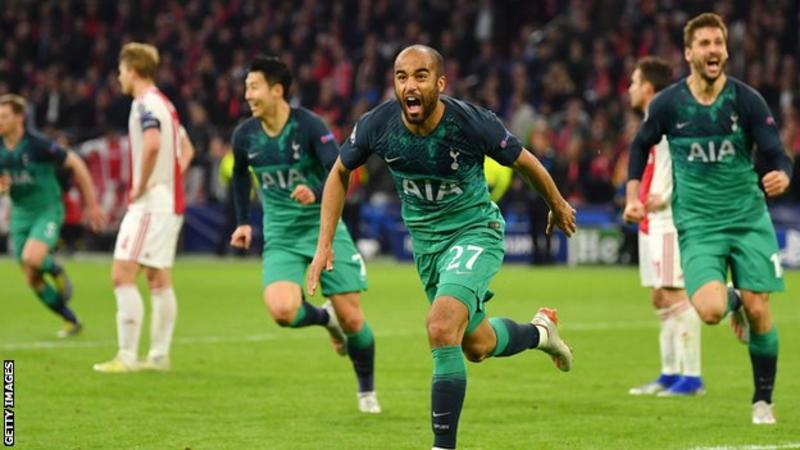 Lucas Moura scored a dramatic 96th-minute winner to cap an astonishing Tottenham fightback against Ajax and set up an all-English Champions League final against Liverpool.

Trailing 1-0 from the first leg, Spurs made the worst possible start in Amsterdam when a towering fifth-minute header by 19-year-old Ajax captain Matthijs de Ligt doubled the advantage for Erik ten Hag's exciting young side.

Tottenham hit the post through Son Heung-min before Hakim Ziyech doubled Ajax's lead on the night with a sweeping finish after an assist by former Southampton winger Dusan Tadic.

That left Spurs 3-0 behind on aggregate yet, in another pulsating semi-final, Mauricio Pochettino's side scored twice within five minutes in the second half.

Moura reduced the deficit with a composed finish before the Brazilian's shot on the turn, after keeper Andre Onana had denied substitute Fernando Llorente, levelled the scores on the night and left Spurs requiring one goal to reach the final in Madrid on 1 June.

In a frantic finish, Vertonghen headed against the bar from four yards before Moura completed his hat-trick with a left-foot shot from 16 yards deep into stoppage time as Spurs won on away goals to reach their first Champions League final.

It will be the second all-English final in the competition after Manchester United beat Chelsea on penalties in Moscow in 2008.