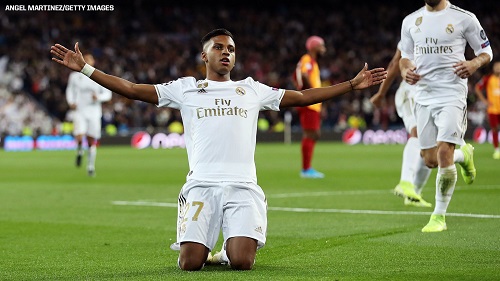 Rodrygo Goes scored a perfect hat-trick and Karim Benzema also hit a double as Real Madrid took a huge step towards reaching the Champions League last 16 with an emphatic 6-0 win over Galatasaray.

Eighteen-year-old Rodrygo netted twice in the first seven minutes at Santiago Bernabeu and later added a stoppage-time third as he became the youngest Brazilian to score in Europe's premier club competition.

Sergio Ramos' penalty had Madrid three up with the game effectively over after 14 minutes and Benzema scored in each half to reach 50 goals in the competition for Madrid, making him only the fourth player to achieve the feat for a single club.

After a poor start to their Group A campaign, Madrid are now five points clear of third-placed Club Brugge – who lost to Paris Saint-Germain on Wednesday - with two games to play, while Gala are out as a result of their chastening defeat.

Rodrygo's opener was impressive as he collected Marcelo's cross before cutting inside past Mario Lemina to send a fine left-footed finish into the far corner.

He doubled his tally when a mistake from Mariano gave Marcelo the chance to set up his compatriot again, the forward this time heading in a left-wing delivery from eight yards.

VAR ruled in Madrid's favour when Toni Kroos – who scored the only goal in the reverse fixture in Turkey a fortnight ago - complained he had been fouled by Steven Nzonzi right on the 18-yard line, Ramos beating Fernando Muslera with a cheeky Panenka from the resulting spot-kick.

Casemiro had a goal ruled out and Eden Hazard was denied by Muslera, but Benzema ensured it was four in the last minute of the first half with a simple finish, an assist from the impressive Rodrygo coming after a dreadful pass from Yuto Nagatomo put Gala in trouble.

After the break, Muslera denied Kroos before Christian Luyindama blocked Benzema's follow-up near the goal-line, with the goalkeeper again called into action to keep out substitute Isco from the resulting corner.