UCL: Thunder strikes at Anfield, Liverpool does the unthinkable to eliminate Barcelona 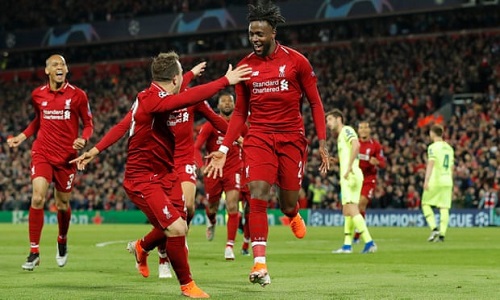 UCL: Thunder strikes at Anfield, Liverpool does the unthinkable to eliminate Barca
Shares

Liverpool did the unthinkable as they beat Barcelona 4-0 to qualify for the finals of the UEFA Champions League.

Liverpool trailed 3-0 in the first leg and the second leg looked done and dusted for Barcelona.

With two of Liverpool's top two players out, Salah and Firmino the likes of Origi and Shaqiri field in.

Liverpool began on the front foot as they got the opener through Origi after Henderson's shot was blocked.

Barca had several chances to equalize but blew them away, that came back to haunt them in the second half as substitute Giogino Wijnaldum struck twice within a minute.

Origi put the icing on the cake in the 79th minute when Origi scored again to make it 4-0 on aggregate.

Liverpool will now meet the winner of the game between Tottenham and Ajax in the final.