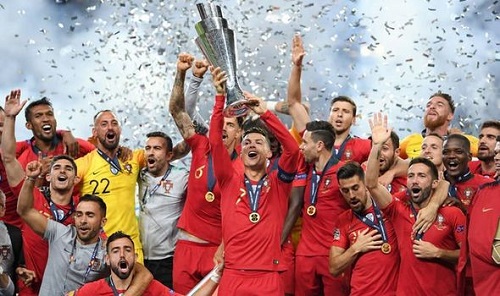 Holders Portugal will play World Cup winners France after the draw for the UEFA Nations League group stage was made in Amsterdam.

The same group also contains Croatia, meaning a repeat of the 2018 World Cup final is set to be played.

Meanwhile, England will face Belgium, Denmark and Euro 2016 giant-killers Iceland in the second edition of the Nations League.

Spain will face Germany in Group A4, while the Netherlands will play Italy in Group A1, with some bumper ties set to be played out.

Wales were drawn in Group B4 alongside the Republic of Ireland, in the only group pitting two of the home nations against each other.

The first competition was won by Portugal, who hosted the finals in 2019. They beat the Netherlands 1-0 in the final thanks to a goal from Goncalo Guedes, while England finished third after beating Switzerland on penalties in the third-place play-off.

The group phase will be played from September to November 2020, with the four group winners from League A qualifying for the finals tournament in the summer of 2021.

A number of changes have been made to the 2020-21 edition of the Nations League, both in structure and the ramifications of results.

Each group in the top three divisions has been expanded to four teams each, meaning each division now comprises 16 teams.

This means these teams will no longer have to play international friendlies on Nations League dates, as had previously been the case with an odd number of teams in each group.

Eliminating 'meaningless' international friendlies was one of the key driving forces behind the creation of the tournament.

However, the bottom tier will contain seven teams, meaning some friendlies will still be played.

The Nations League also wonâ€™t guarantee any places for the 2022 World Cup. In the first edition, four teams qualified directly for Euro 2020.

Now, two of 12 World Cup qualifying play-off places for three spots at the finals in Qatar will be earned through the Nations League.

The best two Nations League group winners who don't qualify for either the World Cup finals or qualifying play-offs will then go into the play-offs - due to be played in March 2022.