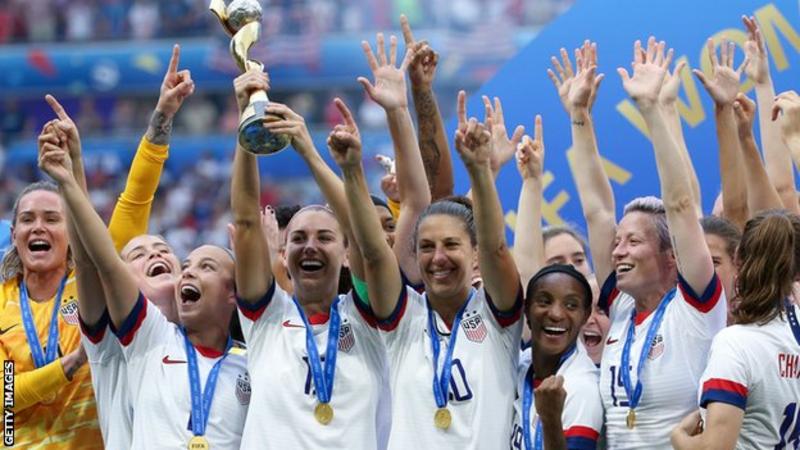 World Cup winners Megan Rapinoe and Alex Morgan say the US womenâ€™s national team will appeal against their defeat in their equal pay lawsuit.

Last week,Â judge Gary Klausner rejected the players' claimÂ that they are underpaid compared to the US men.

They had been seeking $66m (Â£52.8m) in damages against the US Soccer Federation (USSF) under the Equal Pay Act.

"We were just shocked - we will definitely be appealing," Morgan said.

Speaking to ABCâ€™s Good Morning America, she added: "This decision was out of left field for us. I think for both sides it was very unexpected.

"If anyone knows anything about the heart of this team, we are fighters and we will continue to fight together for this."

Klausner did allow the players' case for unfair treatment in travel, housing and medical support to go to trial, which is set for 16 June in Los Angeles.

Giving its ruling, the court said: "The women's team has been paid more on both a cumulative and an average per-game basis than the men's team over the class period."

But Rapinoe said the figures quoted in the court case were misleading.

The men played 87 games and were paid $18.5m (Â£14.65m). However, the men's figure would probably have been substantially higher had they qualified for the 2018 World Cup.

"If we were under the men's contract, we would be making three times more," she said.

"So you can look at the total compensation. In that time that we've made just a little bit more, we've won two World Cups and we've won just about every single game that we've played in.

"So the rate of pay is just so different. It's just so frustrating.

"I think so many women can understand what this feeling is of going into a negotiation, knowing equal pay is not on the table, knowing anywhere close to your male counterparts is not even on the table."

In March, former USSF president Carlos Cordeiro resigned after lawyers for US football's governing body made submissions as part of the lawsuit in which it was claimed that the job of a male footballer on the national team "requires a higher level of skill based on speed and strength" than their female counterparts.