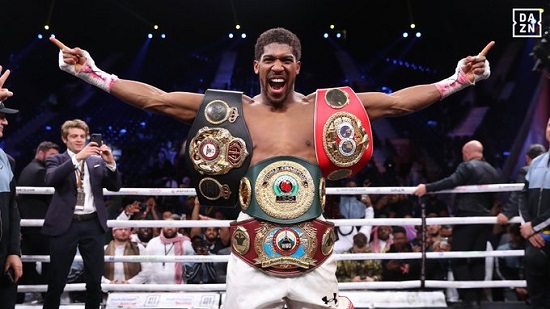 Joshua gained revenge for his nightmare in New York earlier this year, when he fell four times in defeat to Ruiz Jr, by winning a unanimous decision in their rematch and clawing back the IBF, WBA and WBO titles.

This time in Diriyah, in a purpose-built 15,000-seat arena, there had been a downpour in the desert but a disaster for Joshua was averted by his most disciplined and controlled performance to date.

He had to come through a torrid eighth round when Ruiz Jr landed the type of punches that won him the first fight - this time, Joshua teetered but remained upright, and eventually sauntered over the finish line.

Joshua drew blood from Ruiz Jr in the earliest exchanges - he immediately seemed far more relaxed than during the ill-fated first fight and fired a swift right hook which did the damage.

But Joshua then suffered a similar cut in the second round, above his eye, although he remained poised and unhurt.

Joshua was able to keep the shorter and heavier Ruiz Jr at his preferred range by moving quickly on his back foot, and flicking out a jab whenever the champion tried to creep forwards.

Ruiz Jr finally had success at the end of the fourth round when an overhand right crashed home. Joshua felt it, and the bell came at a good time for him.

But still Joshua was still able to execute his game-plan, geed on by Rob McCracken, the long-serving trainer in his corner who he unequivocally backed after the first fight. At his lightest ever for a world title fight and 10lbs lighter than the first fight, the Brit had enough to gas to keep Ruiz Jr at bay.

Joshua landed a strong left hook in the sixth but Ruiz Jr would not be dissuaded from plodding forwards and threatening his own punches. The build-up to this fight had been respectful but, at the end of the sixth, Joshua shot a spiteful stare when Ruiz Jr threw two illegal punches.

Mexico's first ever heavyweight champion, by the seventh, was getting frustrated and the referee admonished him for more illegal shots.

They went toe-to-toe for the first time moments later, in scenes reminiscent of the first fight when Joshua fell, but this time he remained firm. 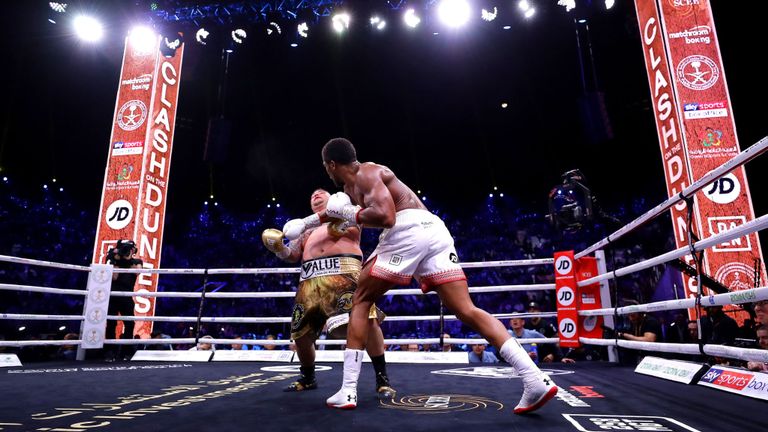 Ruiz Jr's eyes lit up in the eighth round when he landed hard punches to the side of Joshua's head. There was a collective intake of breath at ringside but Joshua did not go down. Joshua then had to absorb even more in the ninth.

It was Joshua's skill and finesse (although he crashed a right hand home in the final round) that ultimately made him a two-time heavyweight champion, joining esteemed company such as Muhammad Ali, Mike Tyson and Lennox Lewis in reigning again after suffering defeat.

Two scores of 118-110 and another of 119-109 meant the world titles returned to Joshua, who celebrated with his family and embraced Ruiz Jr after the decision.