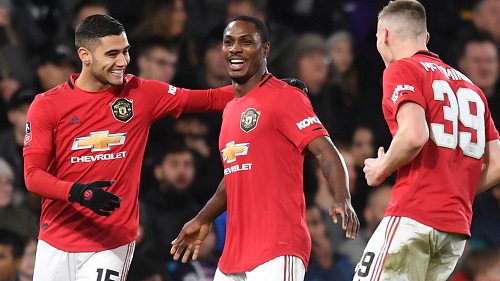 January signing Ighalo again showed why hisÂ shock acquisition in JanuaryÂ may yet prove to be shrewd business with two smart finishes to book a tie with Norwich at Carrow Road later this month.

The 30-year-old now has three goals from just two starts and he overshadowed a reunion with United's all-time leading goalscorer Wayne Rooney at Pride Park.

"I don't care what anyone says. We want to keep the momentum going and make sure we do great this season."

Rooney had his name chanted throughout by the thousands of away fans and came close with two fine free-kicks.

But from the moment left-back Luke Shaw's deflected opener flew in the Premier League side were able to cruise into the last eight.

United have won the FA Cup 12 times - one behind Arsenal's record haul - while Derby have now played in six fifth-round ties since 1999 and failed to reach the quarter-finals on each occasion.