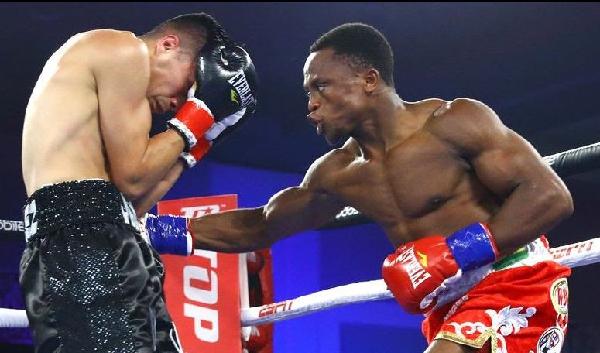 Isaac Dogboe took his biggest step yet toward a title shot at a 126-pound title on Saturday.

The former 122-pound beltholder from Ghana got off to a quick start and then withstood a rally from Joet Gonzalez to win a split decision in a 10-round bout Saturday night at Grand Casino Hinckley in Hinckley, Minnesota.

The fight was billed as a WBC title eliminator even though Dogboe and Gonzalez were ranked Nos. 5 and 6, respectively.

However, by Round 4, during which Gonzalez stung Dogboe with a right hand, the Los Angeles fighter picked up his work rate and walked down his opponent much of the rest of the fight.

That produced some back-and-forth rounds that were difficult to score, although Gonzalez clearly did his best work in the second half of the fight.

The fight seemed to be in doubt as the bell rang to start the final round, in which the combatants stood toe to toe and emptied their respective gas tanks.

All three judges turned in scores of 96-94, two for Dogoe and one for Gonzalez. Dogboe won the 10th round on all three cards, which gave him the victory.

And a shot at a title appears to be on the horizon.

“Whoever the champions are, they should watch out,” he said. “The ‘Royal Storm,’ I am back, baby!”

“Close fight,” he said. “I thought I won the fight. I buckled him, I believe, twice in the fight. I stunned him. He didn’t really land too many shots. I landed the cleaner, harder shots.

“I was pushing him back, and he was holding most of the time, roughing me and trying to stop me. But I thought I won the fight.”

Dogboe has now won four consecutive fights since he lost back-to-back fights to Emanuel Navarrete in 2018 and 2019, the second time by a knockout.

However, his last three fights have all been close, majority decisions over Adam Lopez and Christopher Diaz, and now the split decision over Gonzalez.

Meanwhile, Gonzalez was hoping to get a third opportunity to fight for a featherweight title after two disappointments. However, he has now lost three of his past five fights and will have to get back in line for a title shot after his latest setback.