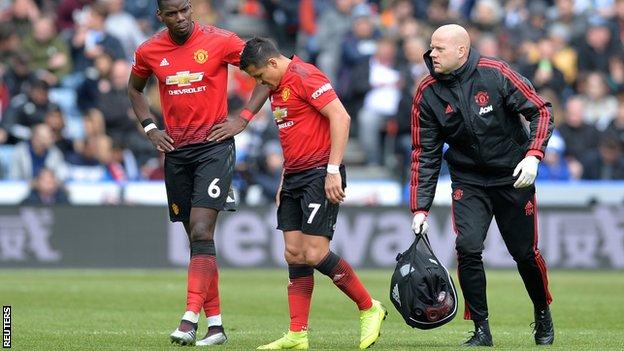 Manchester United will have to settle for Europa League football next season after being held by a Huddersfield side who were relegated in March.

The Terriers had managed just four points in their previous 23 games - but watched by outgoing chairman Dean Hoyle, they earned a draw as Isaac Mbenza's first goal for the club levelled Scott McTominay's first-half effort.

In a frantic finish, young United substitute Tahith Chong had a shot saved and Paul Pogba hit the bar before David de Gea denied Karlan Grant a winner at the other end.

It means United have now gone five games without a win, their worst sequence since they went eight games without a victory under Louis van Gaal between November and December 2015.

The result means Ole Gunnar Solskjaer's side cannot catch either Chelsea or Tottenham and have only a slim chance of finishing above Arsenal in fifth.

Alexis Sanchez is also a major doubt for the final game of the season against Cardiff at Old Trafford, having limped straight down the tunnel after suffering an injury at the start of the second half.

Huddersfield are 11 points adrift at the bottom of the table and finish their season at Southampton next Sunday. United remain sixth and entertain Cardiff.

Sanchez was given his first start since 2 March as fellow strikers Romelu Lukaku and Anthony Martial were both missing through injury.

The Chilean is in the spotlight before a close season in which Solskjaer has already pledged extensive rebuilding.

For a basic salary in excess of £300,000 - there are also substantial add-ons - a return of one goal and three assists in the Premier League this season is woeful. In addition, Sanchez's salary is not helping United in their contract negotiations with players such as David de Gea, Juan Mata and Ander Herrera.

Yet again, Sanchez was on the periphery, making the odd decent contribution but nothing of great note until he succumbed to injury after 54 minutes.

In contrast, both De Gea and Mata had a more meaningful impact.

De Gea, under scrutiny after a string of disappointing mistakes, twice saved well from Karlan Grant, whilst Mata was by far United's most creative player and almost set up an opportunity for Pogba to double United's lead.

Pogba hit the bar in each half with curling shots but he was another highly-paid member of the United squad whose overall impact failed to match his reputation.