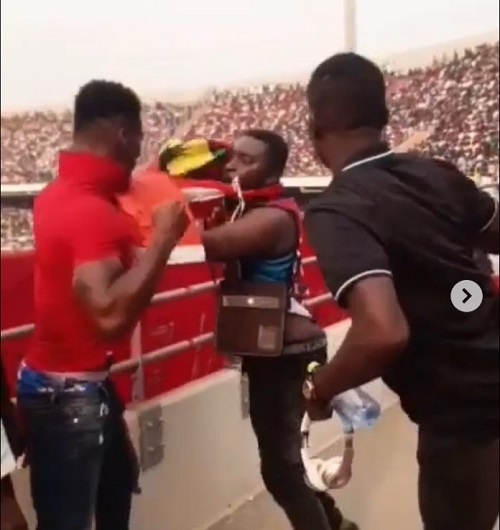 The Ghanaian boxer exhibited unprofessional behaviour on Sunday afternoon when he beat up a Michael Siaw during the Super Clash between Hearts of Oak and Kotoko on matchday 6Â of the ongoing 2019/2020 Ghana Premier League season atÂ Accra Sports Stadium.

In a viral video, Patrick Allotey is seen in a range mood as he engages in a tassel with a fan wielding an Asante Kotoko flag.

While it is unknown what heightened the anger of the boxer, he ended up giving the supporter punches to his face, leaving him to fall to the ground.

The supporter after the incident was left with a deep cut above his left eye and had to get stitched for it.

Reacting to Sunday's incident Allotey said: I am pleading with Ghanaians, especially the victim to forgive me. I have regretted my actions and I promise it will never happen again" he told Oman FM.

It is unclear the kind of punishment or warning the Ghana Boxing Authority will give to Patrick Allotey in the coming days.