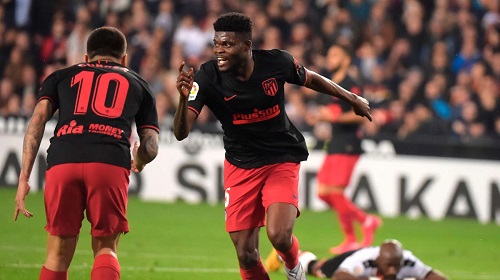 Thomas Partey registered his second La Liga goal of the season as Atletico Madrid were held to a 2-2 draw by Valencia.

The Ghana international scored as his outfit picked an away point at the Estadio de Mestalla.Â

Marcos Llorente opened the scoring for Atletico Madrid in the 15th minute but they were pegged back whenÂ Gabriel Paulista equalised five minutes to the break.

However, Thomas Partey restored his side's advantage two minutes to half time when he went on a solo run before firing in a fierce shot from the edge of the 18-yard area which left Valencia goalie Jaume Domenech with no chance.

The home side once again drew levelled courtesyÂ Geoffrey Kondogbia in the 59th minute.

Diego Simeone's men remains in fourth place, but are under threat from Sevilla and Real Sociedad who could leapfrog them should they see off Espanyol and Eibar respectively on Sunday.

Atletico Madrid next turn their attention to the Champions League Round of 16 where they tackle reigning champions Liverpool at the Wanda Metropolitano next Tuesday.