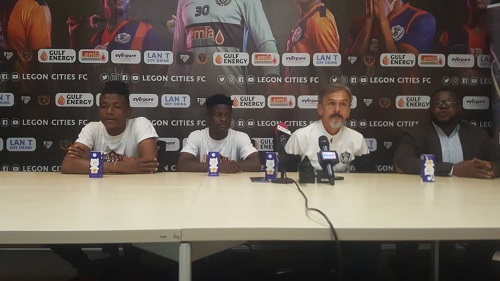 His comment comes on the back ofÂ Legon Cities' struggles at home in the ongoing campaign. The Royals have drawn the majority of their games at home with only two wins out of the 6 six games recorded at the Accra Sports Stadium after matchday 12 in the ongoing Ghana Premier League.

However,Â Â Abdulahi Muhammed says talk of being under pressure to deliver at the Accra Sports Stadium should be put aside as they feel at ease playing at the nation's Wembley.

"We don't feel nervous playing at the Accra Sports, we are very comfortable and play to the coach's tactics, the issue is football is unpredictable and we do not get the results, but we hope against WAFA we will get the results".

Having his take on the game,Â Coach Goran BarjaktarevicÂ assured fans of LegonÂ CitiesÂ that his outfit is working hard on their goal-scoring abilityÂ and the results will pay off soon having scoredÂ a paltry 8 goals after 12 games.

He added his team is on a missionÂ to end the Academy lads away invincibility.Â

"Promising to beat your opponent is arrogance, this is football and anything at all can happen, all I can say is we will go all out to search for the win"

"They have not lost any away game yet but they have drawn a lot, so it will be a tough game".

It has been confirmed that Afrobeat musician Krymi willÂ be performing on Friday, the Independence Day when Legon Cities welcome WAFA in the Ghana Premier League match week 13 at the Accra Sports Stadium.

The â€˜Dedeâ€™ crooner will thrill fans who throng the nationâ€™s Wembley to watch the clash on March 6 at 7.00 pm.