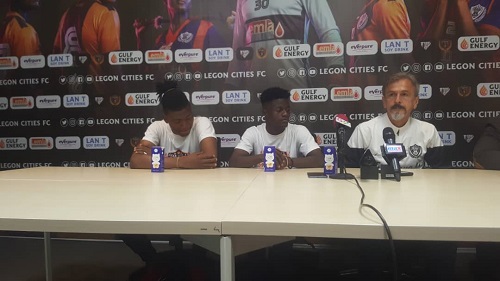 Coach Goran Barjaktarevic has assured fans of LegonÂ CitiesÂ that his outfit is working hard on their goal-scoring ability ahead of the matchday 13 against WAFA.

The Royals have scored a paltry 8 goals so far in the 18-team Ghana Premier League which is the lowest by a club and will need to be scoring enough to pick up 3 points as they are on a four-match winless run.

They take on WAFA who are one of the free-scoring sides and have the best defence having conceded only six goals.Â

Speaking at his press conference ahead of the WAFA clash,Â theÂ Bosnian-German tactician his outfit is working on their composure in front on goal and the results will show soon.

"We are not cool in the penalty box, the players score a lot in training but turn to be jittery when they get the chances, that is something we are still working hard"

Ahead of the match,Â Legon Cities FC who changed their name from Wa All-Stars at the start of the season and has managed to find the perfect balance between football and entertainment in their approach to attract numbers and grow their fanbase have announced thatÂ Afrobeat musician Krymi willÂ be performing on Friday, the Independence Day when they welcome WAFA in the Ghana Premier League match week 13 at the Accra Sports Stadium.

The â€˜Dedeâ€™ crooner will thrill fans who throng the nationâ€™s Wembley to watch the clash on March 6 at 7.00 pm.