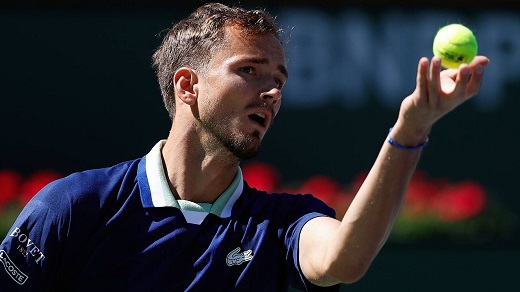 Russian and Belarusian players will not be allowed to compete at Wimbledon this year because of the invasion of Ukraine.

The All England Lawn Tennis Club (AELTC) said it had a responsibility to "limit Russia's global influence through the strongest means possible".

"In the circumstances of such unjustified and unprecedented military aggression, it would be unacceptable for the Russian regime to derive any benefits from the involvement of Russian or Belarusian players," a statement from the AELTC read.

"It is therefore our intention, with deep regret, to decline entries from Russian and Belarusian players to Wimbledon."

Sabalenka reached the semi-finals of last year's tournament, while Medvedev, who has been announced as one of the star draws at the grass-court warm-up event at 's-Hertogenbosch in the Netherlands today, reached the fourth round.

Russian world number 15 Anastasia Pavlyuchenkova - who called for the war to stop earlier this year - and 18th-ranked Victoria Azarenka of Belarus will also miss out.

The Lawn Tennis Association has also banned Russian or Belarusian players from playing at any of the UK grass court tournaments.

They will all still be able to compete at the French Open, which begins in May.

Players from both countries have been allowed to compete on the tennis tour but not under their national flags.

"Given that Russia is a strong tennis country and our athletes possess top lines of the world rating, the tournament itself would suffer because of this ban," he said.

"It is unacceptable to make the athletes once again hostages of certain political prejudice, intrigues and hostile actions towards our country."

The AELTC, which organises Wimbledon, consulted the government in April about whether to allow players to compete.

"We recognise that this is hard on the individuals affected, and it is with sadness that they will suffer for the actions of the leaders of the Russian regime," AELTC chairman Ian Hewitt said.

"Given the importance of not allowing sport to be used to promote the Russian regime and our broader concerns for public and player (including family) safety, we do not believe it is viable to proceed on any other basis at The Championships."

A statement from the LTA said it is "important to do all it can to support Ukraine at this time".

"LTA believes that tennis must join many other areas of sport and public life in sending a clear signal to the Russian and Belarusian states that their actions are the subject of international condemnation," a statement read.

"The continuing participation of Russian and Belarusian nationals at events risks providing a boost to these regimes when there is an unprecedented international effort to isolate them and sanction their actions."

Sports minister Nigel Huddleston previously said "nobody flying the flag for Russia should be allowed" to play at Wimbledon.

However, WTA head Steve Simon told BBC Sport in March that he did not believe players from the two countries should be banned from tournaments.

Russia was previously banned from defending its Davis Cup and Billie Jean King Cup team titles after the country's invasion of Ukraine - a military operation supported by Belarus.

The Women's Tennis Association (WTA) and the men's association (ATP) have suspended their combined event scheduled to take place in Moscow in October.

The International Tennis Federation (ITF) has also cancelled its events in the country.

'There comes a time when silence is betrayal'

Svitolina has taken a break from the sport to deal with a back problem and the emotional impact the invasion has had on her.

"If applicable, we demand to exclude and ban any Russian and Belarusian athletes from competing in any events," she wrote.

"In times of crisis, silence means agreeing with what is happening.

"There comes a time when silence is betrayal, and that time is now."

"It cannot just be a sanction against 90% of the Russian people and 10% not," Savchuk told the New York Times.

"It has to be even and I think it is collective guilt."

"I believe Russia should be isolated in all possible ways, and the people of Russia have to solve this problem," he told BBC Sport.