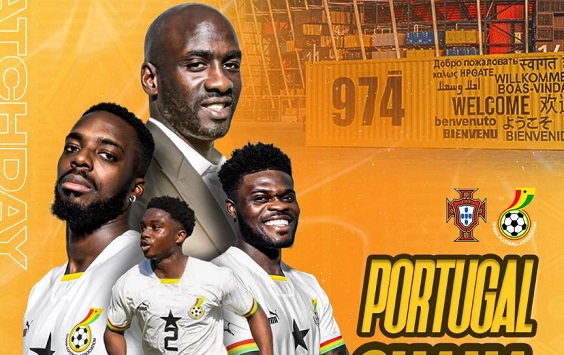 The Black Stars of Ghana will later today begin their World Cup 2022 campaign against Portugal.

The clash scheduled for a 4 pm kick will be played at Stadium 974 in Ras Abou Aboud, Doha.

The Black Stars after a disappointing campaign in Brazil in 2014 and having missed out in the last edition in Russia will be hoping to make a strong statement against Cristiano Ronaldo's Portugal today.

However, they will have to play above themselves to also get a win like the shocks Saudi Arabia and Japan handed to Argentina and Germany respectively.

Speaking ahead of the game, Black Stars head coach Otto Addo and his skipper Andre Ayew said they are focused and claiming all three points in their World Cup opener.

The pair said they had no interest in the issues between the Portuguese skipper Cristiano Ronaldo and his former club Manchester United.

“I don’t know and to be honest, I don’t care. It’s not our problem and I don’t think it’s a big problem,” Addo said.

“Everybody wants to win. No matter what happens, it’s a big stage, a big game at the World Cup level, so I don’t think normally this can disrupt anybody.”

Skipper Andre Ayew who will be making his third appearance of the World Cup said it was not a concern for the Black Stars if Ronaldo's issues were affecting the Portuguese.

Acknowledging that the Portuguese were favourites on paper, Ayew maintained that the tie would be decided by the commitment of players on the pitch.

"We go into this game with Portugal favourites on paper. But we have to show that it is more important what happens on the pitch. We are playing a big side with top players, but we believe in ourselves and will make it very difficult for them," he said.

"When you are playing the first game of a tournament it is never the decisive one. Whatever happens, you still have a chance to go through. The first game is one where you can go for it and be brave. It would be a great bonus for us to get something (from the match)."

What the stats say

Portugal and Ghana’s only previous encounter was in the group stages of the 2014 Fifa World Cup. Portugal won 2-1, with a Cristiano Ronaldo winning goal.

Portugal have won only three of their last 14 World Cup matches (D6 L5), each of them coming in the group stage of the competition – their last victory in the knockout stage came in June 2006, when they progressed to the quarterfinals thanks to a 1-0 win against the Netherlands.

Portugal are winless in their last three opening games of a Fifa World Cup tournament (D2 L1). Despite this, having progressed from the group stage in 2018, they could reach the knockout stage in two successive editions of the tournament for the second time, after doing so in 2006 and 2010.

Ghana will make their fourth appearance at the Fifa World Cup, each of these coming in the 21st century. They have failed to progress past the group stage only once before, although this was in their last participation in 2014.

Ghana reached the quarterfinal of the Fifa World Cup in 2010, which is the joint-best finish for an African side in the competition, alongside Cameroon in 1990 and Senegal in 2002.

Ghana have found the net in each of their last five Fifa World Cup games and could become the third African side to score in six in succession in the competition, after South Africa (6 between 1998 and 2010) and Nigeria (8 between 1994 and 1998).

Since the start of detailed Opta World Cup data, Ghana have averaged the most shots-per-game in the Fifa World Cup among all teams competing in 2022 (19).

Catch the 2022 FIFA World Cup on SuperSport in 13 languages. Press "Options" on your remote for languages available in your region.

Portugal’s Cristiano Ronaldo is one of only four players to score in four different Fifa World Cup tournaments, alongside Pelé, Uwe Seeler and Miroslav Klose. No player has found the net in five editions.

This will be the fourth major tournament for Fernando Santos in charge of Portugal; in each of his previous three (two European Championship and the 2018 World Cup), he progressed from the group stage, although was eliminated in the last 16 in both of the last two.

Should he play in the 2022 Fifa World Cup, Ghana captain André Ayew will have appeared in more matches in the competition than any current player for African nations (8, currently 7).