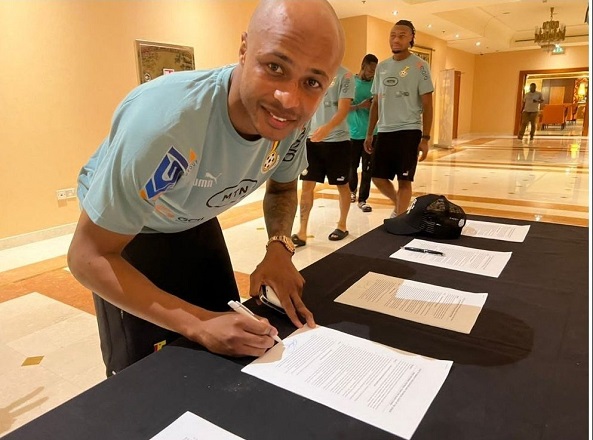 Black Stars players, technical team, management, and other members of the Ghanaian delegation who are currently in Qatar for World Cup 2022 have signed a code of conduct ahead of the team’s first game against Portugal.

The delegation signed the code of conduct upon their arrival at the team’s training camp in Abu Dhabi, where they beat Switzerland 2-0 in a pre-World Cup friendly on Thursday.

They are expected to be ethically upright, respectful, and honest, to have a high level of Integrity, and to uphold the good name of the Black Stars, Ghana Football Association and the West African country during their stay in Qatar for the global tournament.

The code of conduct defines the norms, rules, duties and responsibilities, or proper practices of each member as well as the collective behaviour of the team.

Black Stars received a massive welcome on Friday when they arrived in Qatar and are pumped up ahead of their first game on Thursday.

The four-time African champions take on former European champions Portugal in Doha with the match scheduled for 16:00 GMT kick off.

After Portugal, Black Stars will play South Korea on November 28 and Uruguay on December 2.