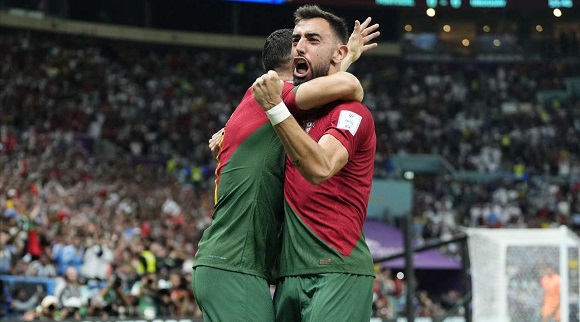 Portugal secured their passage into the last 16 at the World Cup 2022 after a 2-0 win courtesy of a Bruno Fernandes brace.

The European side controlled the first half in terms of possession but without creating any real clear-cut opportunities.

Uruguay looked to pinch the ball back when they could but did not fashion much in the way of attacks in the early period of the first half.

Rodrigo Bentancur then had the best chance of the half, going close after driving through the Portuguese defence but Diogo Costa was equal to it.

Portugal took the lead in the second half through Fernandes.

Uruguay made attacking changes and went for it, going close on numerous occasions.

Maxi Gomez saw an effort crash off the post and just moments later substitute Luis Suarez fired just wide when it looked certain to be the equaliser.

Portugal countered through Fernandes who won a penalty after the ball struck Jose María Gimenez's arm. Fernandes was on hand to score from the spot and make it 2-0.