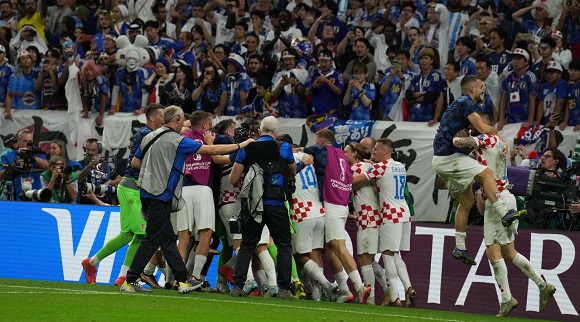 Dominik Livakovic proved to be the hero for Croatia as he made three key saves to send his nation through to the World Cup quarter-finals as they defeated Japan 3-1 on penalties at Al Janoub Stadium to break the hearts of the Samurai Blue.

Hajime Moriyasu’s Japan side came into the match full of confidence after wins over Spain and Germany in the group stage, and they were looking to add a third European side to their list of scalps at this tournament.

The game started off in a predictable fashion, as Croatia looked to dominate the ball. However, despite their lack of possession early on, Japan were the side that created the better chances and looked more dangerous going forward.

The Samurai Blue eventually saw more of the ball towards the end of the first period, and were the side to strike first two minutes before the break. Daizen Maeda reacted quickest to Maya Yoshida’s knockdown in the six-yard box from Ritsu Doan’s initial cross to tap the ball home beyond Dominik Livakovic in the Croatia goal.

Then, completely against the run of play, Croatia found a much-needed equaliser ten minutes into the second half. Dejan Lovren’s cross from deep was headed into the far corner by Ivan Perisic from inside the area as Zlatko Dalic’s side were back on level terms.
That sparked Croatia into life, as they continued to grow into the contest. Despite both sides creating more chances, they could not be separated after 90 minutes, and extra-time was required for the first time in the tournament.