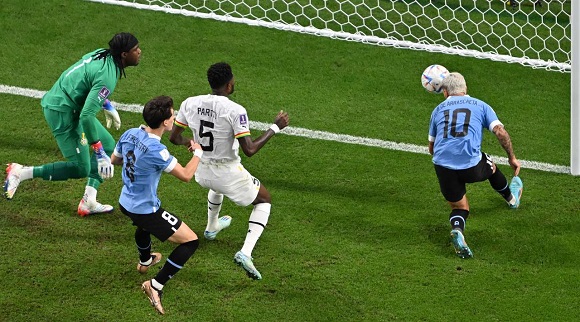 The Black Stars of Ghana couldn't redeem their image after succumbing to a 2-0 defeat in the FIFA World Cup 2022 final Group H game against Uruguay at the Al Janoub Stadium.

12 years ago, Black Stars failed to become the first African nation to book a ticket to the 2010 Worl Cup semi-finals after a 4-2 penalty defeat to the South Americans.

However, it was the same old story at the Al Janoub Stadium on Friday, December 2, 2022 as Ghana once again failed to beat Uruguay in a World Cup game.

It was the Uruguayans who started the game better of the two sides in the opening minutes but Ghana had the opportunity to open the floodage at the stadium after Mohammed Kudus was brought down inside the box by goalkeeper Sergio Rochet in the 17th minute.

Minutes later Uruguay made Ghana pay for fluffing their lines as they scored the first goal of the game courtesy of Giorgian de Arrascaeta's header.

He headed home after Ati Zigi's rebound from Luis Suarez's shot fell in front of him.

Suarez again played a part as the South Americans doubled their advantage by assisting the second goal in the 32nd minute. He looped a brilliant pass to  Giorgian de Arrascaeta who showed good awareness inside the box and blasted the ball to make it 2-0 for the South Americans.

But the changes failed to impact the game as the Urugauy remained resolute in defence.

He again there caution to the wind by bringing attackers into the game as Antoine Semenyo and Daniel Kofi Kyereh replaced Inaki Williams and Salis Abdul Samed.

Mohammed Kudus came close to reducing the deficit for Ghana but his strike was parried by Sergio Rochet.

With both sides failing to score and 90 minutes reached the referee brought proceedings to an end at the Al Janoub Stadium.

Despite winning today's contest, Uruguay and Ghana have both been kicked out of the tournament. Result in the other match did not go in the South Americans' favour.

Portugal and South Korea have respectively qualified to the last 16.