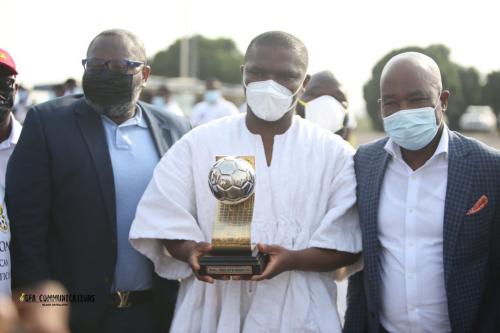 Minister for Youth and Sports Mustapha Ussif has congratulated the Black Satellites for winning the 2021 edition of the Total AFCON U-20 championship which is the nation's fourth trophy.

The Black Satellites gifted the country a huge birthday gift by winning their 4th AFCON title in the just-ended tournament held in Mauritania.

Speaking to the Satellites who arrived in Ghana on March 7, Mustapha Ussif thanked the team for winning the trophy as the perfect independence day gift and urged the team to thrive for more success in the future.

"On behalf of his excellency the president of the Republic of Ghana, Nana Addo Dankwa Akufo-Addo and the good people of Ghana, I welcome you all back home and congratulate you for what you have done by lifting the flag of Ghana high on the global map and we are proud of you," he said.

''3 weeks ago you left this country empty-handed and you are here today with us with gold medals and a trophy. You couldn't have given us any better independence gift than this. This is a befitting independence anniversary gift we are giving to President Akufo-Addo and the good people of this country. Congratulations once again."

Ahead of the final match against Uganda on Saturday, March 6, Mustapha Ussif told players and staff of the team that the match being played on Ghanaâ€™s independence day anniversary should be extra motivation to goad the players on to win the ultimate.

â€œFortunately for us, today happens to be our Independence Day anniversary. As you go into this match, I know you will have the same spirit as our forefathers fought and toiled to get us independence,â€ Mustapha said in his video message to the players.

Meanwhile,Â President Akufo-Addo in a Facebook post, said he is looking forward to hosting the champions at the Jubilee House.

â€œCongratulations to the Black Satellites for winning Ghanaâ€™s 4th AFCON U-20 trophy. Thoroughly deserved victory, and theyâ€™ve made Mother Ghana proud. What a way to celebrate our 64th Independence Anniversary!! Kudos to the team and I look forward to receiving the playing, technical, and management teams to Jubilee House.â€