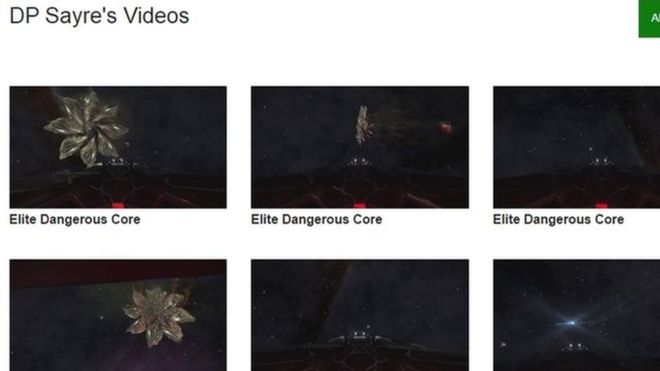 After years of waiting, a player of the Elite Dangerous game seems to have encountered its mysterious aliens.

Gamer DP Sayre recorded a video of his encounter with a massive, flower-shaped organic craft late on 5 January.

Other players of the space exploration and trading game have grabbed videos of similar meetings in deep space.

The encounter ends a three-year hunt by players for signs of belligerent aliens known as Thargoids that featured in the game's earlier versions.

Hints about the eventual appearance of Thargoids have been dropped regularly since the game launched in 2014. Strange objects floating in space and structures found on isolated moons and planets have revealed clues about the location of the aliens.

In an official statement, Elite creator Frontier Developments said: "We are currently investigating reports of unusual sightings around the Elite Dangerous galaxy, but we are otherwise unable to comment on galactic rumour and speculation."

DP Sayre's encounter took place when he was travelling between star systems using hyperspace. His ship was pulled out of hyperspace with all its instruments and weapons rendered useless. As he was drifting in space a massive organic shaped ship appeared, scanned his vessel and then jumped to hyperspace.

Attempts by Mr Sayre and others to follow the ship proved fruitless. Other Elite players who shot at the ship when they encountered it got no response.

Many of the ships that met the alien vessel appear to have been carrying "unknown artefacts" as cargo. These objects are thought to be the work of non-human species and were rarely seen during the early days of the game.

The artefacts have been appearing with more frequency in the game and analysis of what they do links them to a star system called Merope which in Elite's lore is considered to be the home of Thargoids.

Elite Dangerous is a space trading and fighting game set in a massive simulation of the Milky Way.