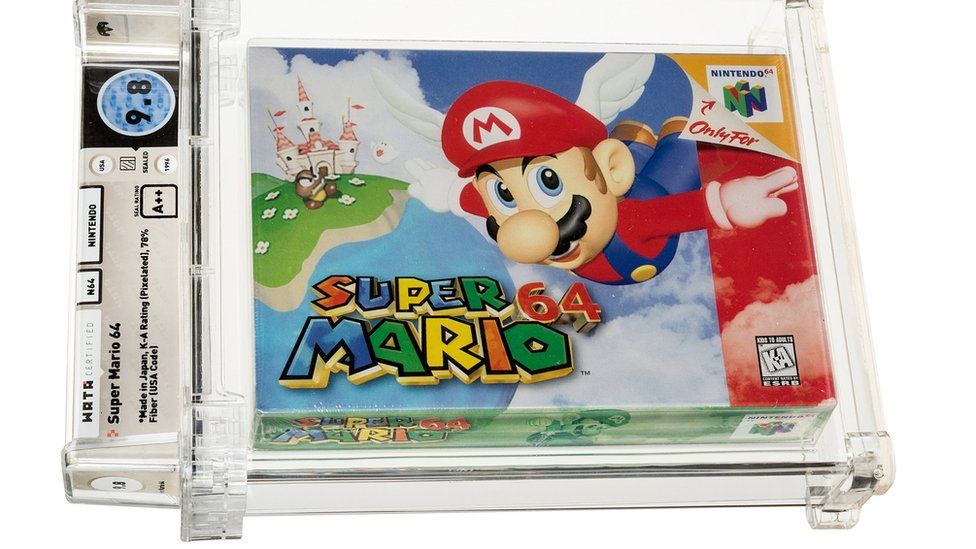 A sealed copy of video game Super Mario 64 has sold at auction for more than $1.5m (Â£1.1m), shattering records.

The 1996 cartridge was a launch title for the Nintendo 64 console, and was one of the most influential early 3D platformers.

The auction house said there were "fewer than five" copies in such good condition.

The sale dwarfed another record-breaker, an original Legend of Zelda cartridge, set just two days before.

That original Nintendo Entertainment System (NES) cartridge sold for $870,000 on Friday, briefly making it the world's most expensive game.

Neither game was bought for the rarity of its gameplay experience - Nintendo has rereleased both for its Nintendo Switch console.

Instead, they have value as physical memorabilia, in the same way as rare trading cards.

The Super Mario 64 cartridge was graded by video game collectable firm Wata at a 9.8 A++ rating - meaning it is both in near-perfect condition and its seal is intact and "like new".

A high rating is not enough to guarantee a high auction price - although it helps. Another copy of Super Mario 64 in the same auction with a 9.6 A++ rating sold for a comparatively affordable $13,200.

But rarer copies of more popular games attract the most bids.

Super Mario 64 was the best-selling game for the Nintendo 64 system, and is widely seen as an important game in video game history. It marked Mario's first move into three dimensions, distinct from his side-scrolling origins.

While many modern gamers feel it has not aged particularly well and is widely thought to have significant camera issues, it is still considered among the best video games ever made. Heritage Auctions, the company behind the sale, was taken by surprise at the huge price it eventually attracted.

Ahead of the auction, much of the attention had been on the rare Zelda cartridge.

The 9.0 A-sealed copy of 1988's The Legend of Zelda was the first game in the series, and has gone on to be one of the best-performing and most critically-acclaimed in Nintendo's entire catalogue.

It was expected to reach a high price because this copy belonged to an early production run - making it one of the first ever made to still exist. Heritage Auctions said that to its knowledge, only one earlier production copy is known to exist, and may never be put on sale.

"This copy [is] the earliest sealed copy anyone can realistically hope to obtain," it wrote.

Many expressed surprise that the Mario cartridge - which sold millions and millions of copies - sold for so much.

Kelsey Lewin, a director at California's Video Game History Foundation, tweeted: "despite a lack of population reports, there are many known sealed Super Mario 64 first prints".

Video game collectables have been fetching higher and higher prices, leading some to question whether the market is over-inflated.

The sale of the Zelda cartridge shattered the previous record, set in April for an original NES cartridge of Super Mario Bros, Mario's first outing, which sold for $660,000.

The record-breaking auction this week saw a huge range of collectable games go for high prices - a copy of Final Fantasy III for the Super Nintendo sold for $96,000, as did a copy of Zelda: A Link to the Past.