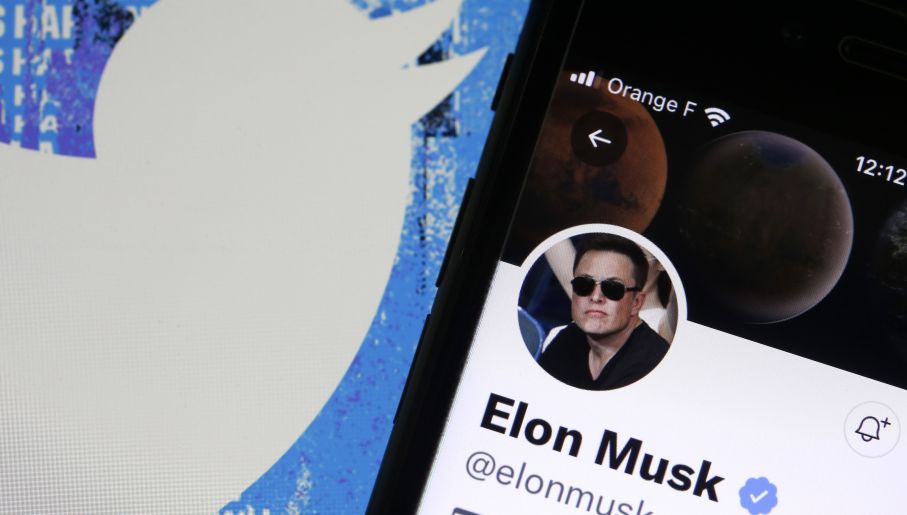 In an update for Apple devices, the company said the feature would be open to users in certain countries who sign up to its Twitter Blue service for $7.99 (£7) per month.

The policy change is controversial, amid concerns that the platform could be swamped with fake accounts.

It follows Twitter's takeover by Elon Musk, who on Friday laid off around half of the company's workforce.

The sought-after blue tick was previously only available to high-profile or influential individuals and organisations - who were asked to prove their identity.

It has been used as a sign that a profile is authentic, and is a key tool to help users identify reliable information on the platform.

The policy change may fuel worries that government figures, celebrities, journalists and brands could be impersonated by any user willing to pay a monthly fee.

Mr Musk, the world's richest person, appears to be looking to diversify Twitter's income, following his acquisition of the firm late last month in a $44bn (£39bn) deal.

On Friday, the billionaire said Twitter was losing more than $4m (£3.5m) per day, insisting that this gave him "no choice" over culling around half the company's 7,500-strong workforce.

The cuts - as well as Mr Musk's fierce advocacy of free speech - have caused speculation that Twitter could water down its efforts on content moderation.

However, Mr Musk has insisted that the firm's stance towards harmful material remains "absolutely unchanged".

The unusual UN intervention pointed to the sacking of Twitter's whole human rights team, saying this was "not an encouraging start" under Mr Musk's ownership.

Few details were publicised relating to the change in verification policy, and a Twitter Blue subscription reportedly remained at its old price of £4.99 in the UK following Saturday's announcement.

Twitter's update said the changes would apply only in the UK, US, Canada, Australia and New Zealand at first.

A flurry of tweets from Mr Musk himself suggested the changes would be rolled out worldwide after they were observed in the initial handful of countries.

It was not clear what would happen to those profiles which already had a blue tick - or if Twitter still planned to "verify" a user other than by charging them a subscription.

Responding to one user who asked what would happen to existing verified profiles, Mr Musk said the timeline for changes to be implemented was a "couple [of] months".

Answering another question about the risk of users pretending to be notable figures, he said Twitter would "suspend the account attempting impersonation and keep the money".

Earlier on Saturday, Twitter co-founder and ex-CEO Jack Dorsey addressed the mass sackings, saying sorry to employees for what had unfolded at his former firm.

Mr Dorsey - who quit as CEO in November and left the board of directors in May - said he was aware Twitter staff were "angry with me".

His statement continued: "I own the responsibility for why everyone is in this situation: I grew the company size too quickly. I apologise for that."

Mr Dorsey appeared to endorse the need for dismissals. Earlier this year, he expressed support for Mr Musk's takeover.

A host of major brands have halted advertising spending with Twitter in recent days amid the company's upheaval.

Mr Musk has been looking to decrease the platform's reliance on adverts - and Saturday's update also promised "half the ads".