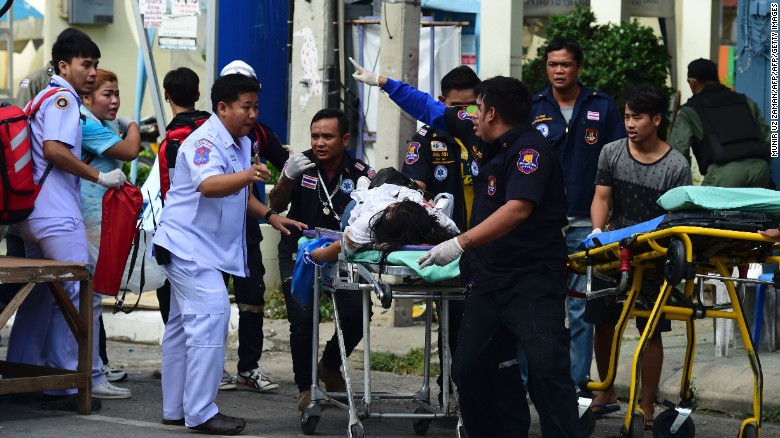 Five provinces in Thailand have been hit by eleven bombings in less than a day, authorities say.

At least four people have been killed and about 34 injured.

No one has claimed responsibility for the blasts -- and it's not clear if the bombings are connected.

Thai police say there's no evidence the attacks are related to international terrorism.

"These incidents are different from the usual terrorism acts, they are more local sabotage on certain locations and provinces," Deputy Police Spokesman Maj. Gen. Piyapan Pingmuang said at a news conference Friday.

The series of blasts come days before the one year anniversary of the Erawan Shrine bombing, which killed 20 people, and five days after the country voted on a new constitution.

Pingmuang said the blasts are not linked to the Erawan bombing.

The first explosion occurred at 3 p.m. local time in Trang province, killing one man and injuring six people, according to Royal Thai Police.

They include citizens from Italy, Germany, the Netherlands and Austria, according to Thomas Mohr with the San Paulo Hospital in Hua Hin.

Shane Brett, who was visiting the area from Tokyo, said he was close by during both explosions.

He told CNN that he heard a "bang" and saw people panicking around the area.

"[I] went to have a look and caught a glimpse of the scene but the whole area was in frenzy and people [were] advised to stay inside," he said.

Security at the Hilton hotel where Brett is staying has dramatically increased, he said.

Police Lieutenant Colonel Samoer Yoosumran said the bombs had been planted in tree pots near the targets.

Edwin Wiek, who has lived in Thailand for almost 30 years, tweeted a photo of a planter that was blown apart in one of the blasts.

Bombs went off again Hua Hin as well as in Surat Thani, Trang Province, Phang-nga province and the resort island of Phuket.

Chanmornoi said four people were injured in the incident, though Royal Thai Police put the number of wounded at three.

Two bombs also went off in the Bang Miang market in Phang-nga province at 9 a.m., Royal Police said. No one was injured.

Back in Hua Hin, another two bombs placed in tree pots went off at 9 a.m. and 9:05 a.m. near a clock tower, a city landmark, according to Royal Police.

"Police have tightened security," Yoosumran said. "We have set up check points and inspecting bags and other things."

Many of the Friday blasts occurred near seaside resorts -- but in the morning, before crowds would have gathered to soak up the sun.

However, the bombs were not particularly big and most beach resorts were on high alert after a bomb was found in Phuket Wednesday night, Paul Quaglia, a Thailand security expert and 20-year veteran of the CIA, told CNN.

Quaglia also said the bombings are likely not related to the recent constitutional referendum, as it would be difficult to plan and execute coordinated explosions in such a short time.

Hua Hin is a popular coastal resort, about 90 miles (145 kilometers) southwest of the Thai capital, Bangkok. The city is home to many international hotel chains, including the Marriott, Hilton and Hyatt.

It's also home to the Klai Kangwon Palace, the seaside residence of Thailand's King Bhumibol Adulyadej.

The palace is located less than a mile (about 2 kilometers) from the bombing site.

The island of Phuket is one of Thailand's most popular destination for foreign tourists. Patong beach is lined with cafes and bars, while the district's Bang La Road is known as one of Thaliand's more raucous nightlife hotspots.

By Friday afternoon, things seemed to be getting back to normal in Phuket -- bars were beginning to open and the police presence was gone, Hong Kong-based freelance journalist Andrew Scott told CNN.

"People really don't seem to care," Scott, who lived in Phuket for five years, told CNN over the phone. "Just as long as they can do what they want to do with their holiday."