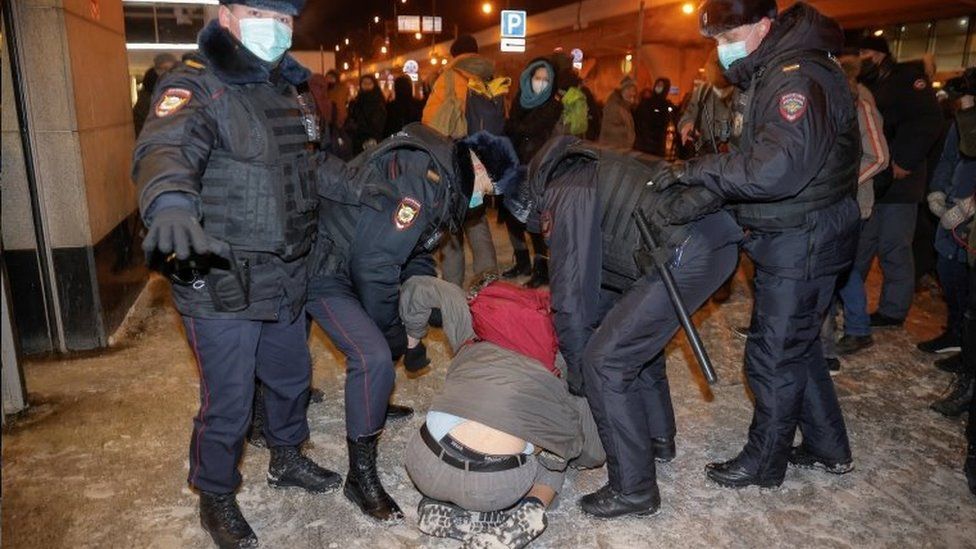 The United States and several European governments have demanded the release of opposition politician Alexei Navalny from Russian detention.

Mr Navalny, 44, was detained by police soon after his flight from Germany landed in Moscow on Sunday.

The activist was returning to the country five months after he was almost killed in a nerve-agent attack he blamed on Russian authorities.

The opposition politician's allegations have however been backed up by reports from investigative journalists.

Reacting to his arrest, the US and EU led calls for Mr Navalny - an arch critic of President Putin - to be freed, but stopped short of threatening any punitive action.

The US Secretary of State, Mike Pompeo, said the Russian authorities were trying to silence their critics. He called for Mr Navalny's "immediate and unconditional release".

US President-elect Joe Biden's incoming national security adviser stuck a similar tone. "The Kremlin's attacks on Mr Navalny are not just a violation of human rights, but an affront to the Russian people who want their voices heard," Jake Sullivan said.

The response from the European Union was no less scathing, with France, Italy and the president of the European Council, Charles Michel, issuing demands for Mr Navalny's release.

In its statement, the UK government said it was "deeply concerned" by Mr Navalny's arrest, adding: "Instead of persecuting the victim of this terrible crime, the Russian authorities should investigate how a chemical weapon came to be used on Russian soil."

What happened in the lead-up to the arrest?
When Mr Navalny was poisoned last August and collapsed on an internal flight in Siberia, he was flown to Germany for emergency medical treatment. As he recovered, he said he intended to return to Russia.

On Sunday he made good on that pledge, boarding a Pobeda Airlines flight in Berlin despite warnings he would face arrest on landing.

The plane was packed with journalists, including Andrey Kozenko of the BBC Russian Service. Shortly before landing, the pilot announced that for "technical reasons", the plane was being diverted from Vnukovo airport, where thousands of Navalny supporters had gathered, to Sheremetyevo airport, causing a stir among the passengers.

"I know that I'm right. I fear nothing," Mr Navalny said upon landing, just minutes before he was detained. "Have you been waiting for me long?" he asked border guards.

He kissed his wife Yulia - who had flown with him from Germany - after police officers warned they would use physical force if he disobeyed their orders to come with them. Despite pleas, Mr Navalny's lawyer was not allowed to accompany him.

The activist was later taken to a police station in Moscow, where he spent the night.

What was the reason given for his detention?
In a statement late on Sunday, Russia's prison service said the opposition leader "had been wanted since 29 December 2020 for repeated violations of the probation period". It added that he would remain in custody until a court decision.

The authorities accuse him of violating conditions imposed after a conviction for embezzlement, for which he received a suspended sentence. He has always said the case was politically motivated.

Separately, Russian prosecutors have launched a new criminal case against Mr Navalny on fraud charges related to transfers of money to various charities, including his Anti-Corruption Foundation.

The activist accuses Mr Putin of targeting him with spurious cases.

The Russian authorities often make out that Alexei Navalny isn't popular with the Russian people, that he's no threat to President Putin.

But his return home five months after being poisoned sparked a major police operation on Sunday.

In chaotic scenes, riot police pushed Mr Navalny's supporters out of the arrivals hall of Vnukovo airport, before the flight was rerouted.

His decision to return home is a direct challenge to Vladimir Putin - and creates a dilemma for the Kremlin.

It risks turning him into a political martyr, a Nelson Mandela-like figure, and sparking more Western sanctions.

Do nothing and the Kremlin's fiercest critic will almost certainly be a thorn in its side in an important election year.

2px presentational grey line
What happened to Navalny last year?
In August, he collapsed on a plane flying from Tomsk in Siberia to Moscow. The pilot diverted the flight to the city of Omsk, where Mr Navalny was admitted to hospital. Two days later, Russian officials allowed him to be airlifted to Germany in an induced coma.

European experts later said he had been poisoned with the extremely toxic chemical weapon Novichok, developed by Soviet scientists in the Cold War.

He was released from a hospital in Berlin in September to continue his recuperation.

Mr Navalny said recently he was able to do push-ups and squat exercises, and therefore had probably almost fully recovered.

Last month, investigative reporters named three agents of Russia's FSB security service who had travelled to Tomsk at the time Mr Navalny was there, and said the specialist unit had tailed him for years.

Mr Navalny then duped an FSB agent named Konstantin Kudryavtsev into revealing details of the operation against him in a phone conversation which he recorded and posted online.

The agent told him that the Novichok used to poison him had been placed in his underpants.

President Putin has dismissed investigations by the Bellingcat website and other groups that have blamed Russian intelligence agents for the attack as "a trick". He has alleged his rival is backed by US intelligence services.