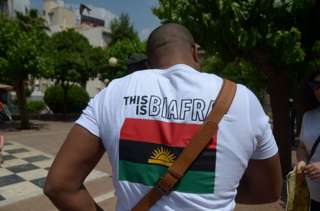 Nigeria's military has linked the beheading of an army couple to the Indigenous People of Biafra (Ipob), a group that wants a breakaway state in south-east Nigeria.

The couple was killed over the weekend while heading to Imo state for their traditional wedding.

He blamed the armed wing of Ipob - the Eastern Security Network - for the killings.

"The Nigerian army will ensure the perpetrators of this dastardly act unleashed on its personnel do not go unpunished," he said in a statement.

It's unclear if Ipob has responded to the accusations by the army.

The local Punch newspaper said the attackers made a video of the incident and circulated it online.

The Ipob movement was founded by Nnamdi Kanu in 2014.

It wants a group of states in south-east Nigeria, made up mainly of people from the Igbo ethnic group, to break away and form the independent nation of Biafra.