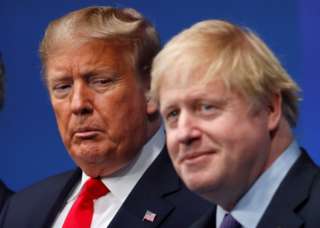 Boris Johnson has drawn comparisons to Donald Trump through much of his ascent to the heights of British politics. Now he’s taking a page out of the former US president’s playbook in his attempt to hold onto power.

Concede nothing. Brush off the criticism. Press on. Make them tear the power from your hands.

If there’s one thing the former president proved in American politics, it is that norms and political traditions only matter if you acknowledge them. And that’s something Trump never did.

Even in his darkest days as president – through two impeachments and countless “has he finally gone too far?” controversies – Trump would point to his loyal base and cite, sometimes without evidence, the enormous support he had in surveys of Republicans and the comfortable margin by which he won the electoral (but not popular) vote in 2016.

Now Johnson is pursuing a similar strategy, citing the support of the millions who voted Conservative in the 2019 election, rather than the dissatisfaction of dozens of politicians and party functionaries who have abandoned him in recent days.

Never mind that the US and British systems of government are decidedly different and that a presidential claim to a popular mandate – when voters checked a box next to their name on the ballot - is considerably stronger than that of a prime minister who governs at the behest of their party.

And set aside that only in Trump’s final weeks, after he had lost his re-election and a mob of his supporters attacked the US Capitol, did he see a mass exodus of advisors akin to what Johnson is experiencing.

Trump showed that claiming to be the voice of the people against the elite establishment can be the political equivalent of a bulletproof vest. That’s a lesson Johnson seems to have taken to heart.