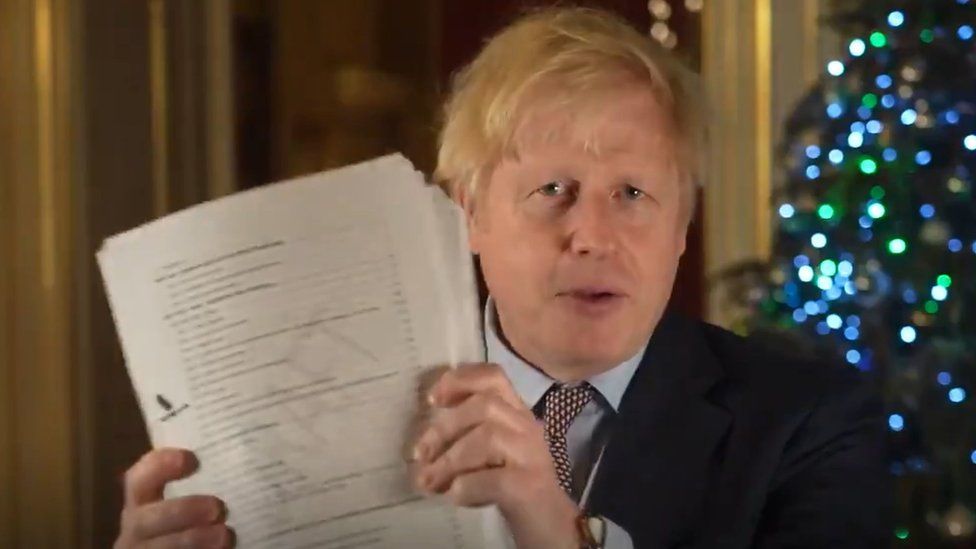 EU ambassadors are receiving a Christmas Day briefing on the post-Brexit trade deal reached with the UK.

EU chief negotiator Michel Barnier is updating diplomats on the agreement, reached after months of fraught talks on fishing rights and business rules.

The UK is set to exit EU trading rules on 31 December - a year after officially leaving the 27-nation bloc.

MPs are still waiting to see the full text of the free trade deal ahead of a vote in Parliament on 30 December.

Labour said it was a "thin agreement" but they would back it as the only alternative to a no deal, meaning it should win approval.

The European Parliament needs to ratify the deal but it is unlikely to do so until the new year, meaning its application will formally be provisional until then.

A 34-page summary of the deal has been published on the government's website.

The UK's chief trade negotiator Lord Frost, said the full document, which is made up of about 1,500 pages - including approximately 1,000 pages of annexes and footnotes - would be published soon.

In a Christmas video message, posted on Twitter on Thursday evening, Prime Minister Boris Johnson brandished a draft copy of the document.

He said: "Tonight, on Christmas Eve, I have a small present for anyone who may be looking for something to read in that sleepy post-Christmas lunch moment, and here it is, tidings, glad tidings of great joy because this is a deal.

"A deal to give certainty to business, travellers, and all investors in our country from January 1. A deal with our friends and partners in the EU."

Earlier, at a Downing Street press conference soon after the deal was announced, Mr Johnson said: "We have taken back control of our laws and our destiny," but stressed the UK "will remain culturally, emotionally, historically, strategically and geologically attached to Europe".

In a press conference in Brussels, European Commission President, Ursula von der Leyen said the deal was "fair" and "balanced" and it was now "time to turn the page and look to the future". The UK "remains a trusted partner," she added.

The deal comes four-and-a-half years after the UK voted to leave the EU and will define the future relationship for decades.

Goods will continue to be traded free of tariffs and quotas, and there will be independent arbitration to resolve future disputes.

It will mean big changes for business, with the UK and EU forming two separate markets, and the end of free movement.

But it will have come as a major relief to many British businesses, already reeling from the impact of coronavirus, who feared disruption at the borders and the imposition of tariffs, or taxes on imports.

Labour leader Sir Keir Starmer - who campaigned against Brexit - said his party would vote for the deal in the Commons.

He said the deal "does not provide adequate protections" for jobs, manufacturing, financial services or workplace rights and "is not the deal the government promised".

But with no time left to renegotiate, the only choice was between "this deal or no deal," he added.

"The clock is no longer ticking."

These were pretty much the first words out of the mouth of the EU's chief negotiator, Michel Barnier, as he announced the just sealed EU-UK trade and security agreement on Thursday.

No more looming "no-deal" threats; no more almost painful uncertainty about future relations across the Channel. This was a historic moment.

A fair and balanced deal for both sides, said the European Commission.

But you'd have to have been half-asleep (or halfway through a bottle of eggnog, cava or pint of Glühwein) to miss the stark difference in tone between UK Prime Minister Boris Johnson's triumphalist announcement on Thursday afternoon and the sombre statement by the European Commission.

Presentational grey line
At his press conference, Boris Johnson said the agreement covered trade worth £668bn in 2019 and would "protect jobs across this country".

He said the UK had not got all it wanted on financial services, a vital part of the UK economy, but he insisted the deal was "nonetheless going to enable our dynamic City of London to get on and prosper as never before".

2px presentational grey line
The basics
A Brexit deal has been agreed, days before a deadline. It means that the UK and the EU can continue to trade without extra taxes being put on goods - but we don't know all the details yet.
What took so long? The UK voted to leave the EU in 2016 and actually left on 31 January 2020, but leaders had until the end of 2020 to work out a trade deal.
There are big changes ahead. Although it's a trade deal that has been agreed, there will also be changes to how people travel between the EU and UK, and to the way they live and work.

The prime minister acknowledged he had been forced to give ground on his demands on fishing.

Fishing makes up 0.12% of the UK's economy but the negotiations went down to the wire over what EU boats are allowed to catch in UK waters.

In future 25% of EU boats' fishing rights in UK waters will be transferred to the UK fishing fleet, over a period of five-and-a-half years.

Barrie Deas, the head of the National Federation of Fishermen's Organisations, said the UK had made "significant concessions on fish", and "there will be a lot of disappointed and frustrated fishermen tonight".

Scotland's First Minister Nicola Sturgeon said fishing got a "bad deal", adding: "Brexit is happening against Scotland's will... It's time to chart our own future as an independent, European nation."

Wales First Minister Mark Drakeford said a deal was better than no deal but said it was "thin" and not what Wales was promised.

The deal also means that except for Northern Ireland, the UK will no longer participate in the Erasmus student exchange scheme. Mr Johnson said it was being replaced with the Turing Scheme, which will include universities outside the EU.

In another development following the deal announcement, the UK Mission to the EU said that people with a driving licence issued in the UK will not need to use an International Drivers Licence in the EU, and that the European Health Insurance Card (EHIC) is to be replaced by a similar scheme. Current EHIC cards will remain valid until their expiry date.