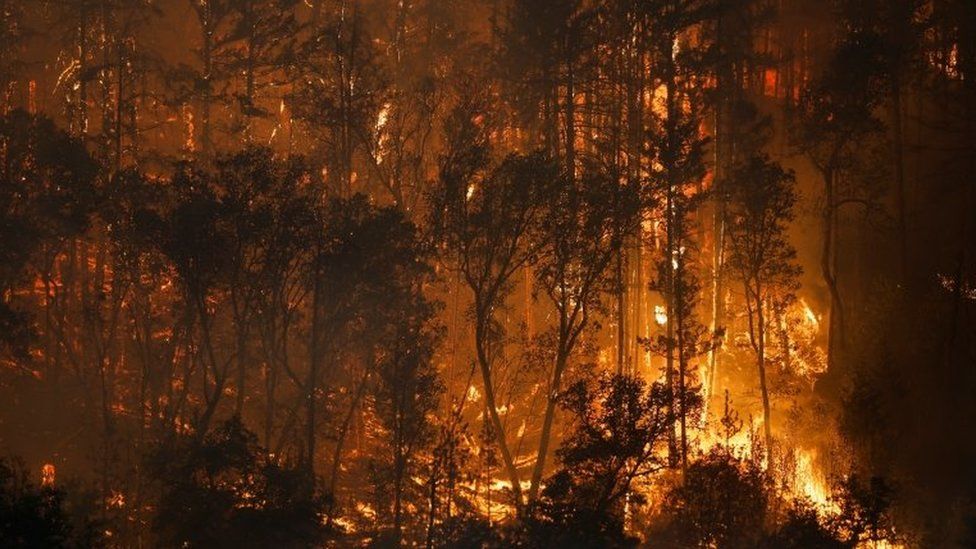 Hundreds of firefighters in California are battling the largest wildfire to spread in the state so far this year.

The McKinney Fire, which started in the northern Siskiyou county on Friday, has already burnt 21,000 hectares (52,500 acres), the state's fire service said.

At least 2,000 residents as well as trekkers on the Pacific Crest hiking trail have left the area, authorities say. Homes have been destroyed.

It was 0% contained as of Sunday, the emergency service's latest report said.

A red flag warning indicating the threat of dangerous fire conditions is in place, as California suffers from persistent drought conditions.

A state of emergency was declared in Siskiyou county on Saturday, after homes were destroyed and infrastructure was threatened, state governor Gavin Newsom said.

The fire was "intensified and spread by dry fuels, extreme drought conditions, high temperatures, winds and lightning storms", he added.

Authorities warn that possible thunderstorms could result in more fires developing in the coming days.

The US Forest Service warned that conditions could be "extremely dangerous for firefighters, as winds can be erratic, and extremely strong, causing the fire to spread in any direction".

Meteorologist Brad Schaaf told the New York Times, however, that smoke from the McKinney blaze could lower temperatures, which would then counteract some of the dangerous "thunderstorm ingredients".

The fire is the second major blaze to hit the state in recent days. The Oak Fire, near Yosemite National Park, is still roaring after eight days but has been 67% contained, the fire department Cal Fire said.

California, which is facing serious drought conditions, still has months of its fire season ahead.

Climate change increases the risk of the hot, dry weather that is likely to fuel wildfires.

The world has already warmed by about 1.1C since the industrial era began and temperatures will keep rising unless governments around the world make steep cuts to emissions.