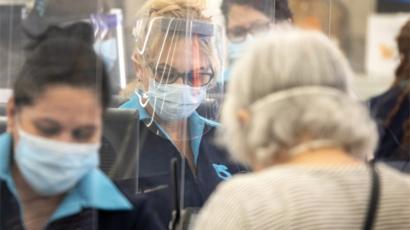 The US Congress has passed a new Covid-19 relief package totalling $484bn (Â£391bn), the fourth aid bill to clear Congress in response to the pandemic.

The legislation, approved 388-5 by the House of Representatives, tops up a small business aid fund, while funding hospitals and testing.

President Donald Trump said he would enact the bill, which passed the Senate unanimously on Tuesday.

Thursday's bill will bring the total federal spending on Covid-19 relief up to $3tn, swelling the US budget deficit towards record levels.

Mr Trump and Democrats are keen on passing another relief bill that could top $1tn, but the president's fellow Republicans are not keen.

Republican Senate leader Mitch McConnell has drawn bipartisan criticism for saying he would support states declaring bankruptcy rather than having the federal government "borrow money from future generations".

The economic ravages of the pandemic were brought into sharp focus on Thursday by official unemployment figures that showed over 26 million Americans have filed for jobless claims in the last five weeks - and 4.4 million last week alone.

In Thursday's bill, lawmakers gave $310bn in new funds to the Paycheck Protection Program, which offers loans to small businesses so they can keep employees on the payroll.

The $349bn allocated to the programme last month ran out last week after just 13 days, leaving millions of business owners questioning how they could keep operating.

There was uproar when it emerged large, publicly traded companies had obtained the funding, and the US Treasury has given them until 7 May to return the money without penalty.

During negotiations for the latest stimulus package, Democrats insisted funds be allocated for hospitals and testing.

Hospitals will receive $75bn, and $25bn will go towards expanding Covid-19 testing - which experts have emphasised is a key step to reopening the economy.

Thursday's legislating took place with social distancing - lawmakers waited in their offices for the vote, came to the floor in small groups and the chamber was cleaned between votes.

Ohio Republican Jim Jordan angered some Democrats for appearing on the House floor - and reportedly coughing - without a face covering.