Coronavirus: EU says AstraZeneca must 'catch up' on vaccine deliveries 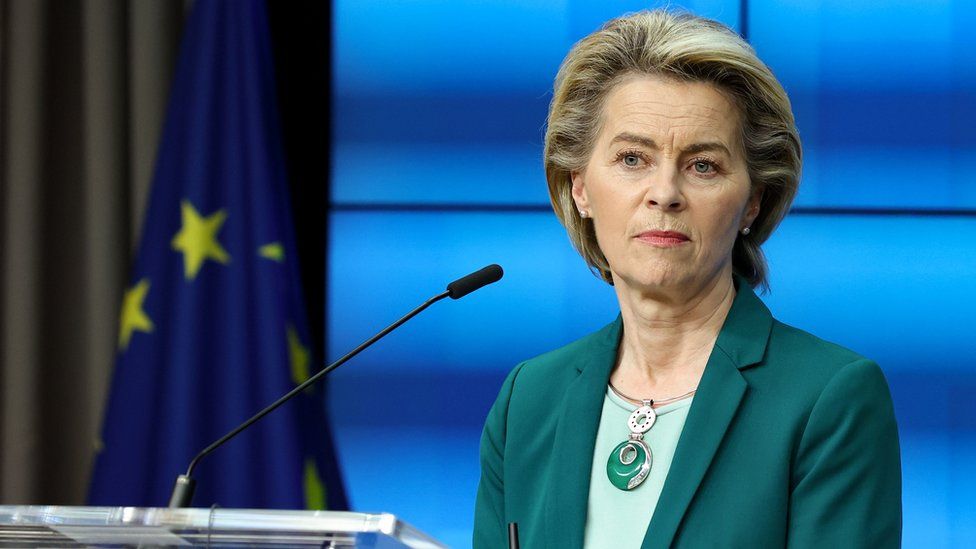 The vaccine producer AstraZeneca must "catch up" on its promised deliveries to the EU before exporting doses elsewhere, the bloc's chief has said.

"The company... has to honour the contract it has with member states," European Commission President Ursula von der Leyen said on Thursday evening.

She spoke after EU leaders held a summit to discuss vaccine supplies.

Meanwhile, French President Emmanuel Macron told reporters this marked "the end of naivety" from the EU.

Vaccine rollouts in European Union states have started sluggishly, and the bloc has blamed pharmaceutical companies - primarily AstraZeneca - for not delivering promised doses. AstraZeneca has denied that it is failing to honour its contract.

"I think it is clear that first of all the company has to catch up," Mrs von der Leyen told a news conference after the virtual leaders summit.

"[It] has to honour the contract it has with European member states before it can engage again in exporting vaccines," she said. "We want to explain to our European citizens that they [can] get their fair share."

The EU has been criticised, primarily by the UK and the World Health Organization (WHO), for so-called vaccine nationalism after it introduced export controls on jabs produced within the bloc.

In response, UK Prime Minister Boris Johnson warned that "blockades" were not "sensible".

He said that a ban would imperil the UK's vaccination drive, which has so far been more successful than most EU member states' vaccine programmes.

Mr Johnson also warned that a ban that extended beyond AstraZeneca's disputed supply could also block jabs produced for BioNTech/Pfizer in Belgium.

But Mrs von der Leyen hit back on Thursday, arguing that the EU was the "region that exports most vaccines worldwide".

"We invite others to match our openness," she said. The EU chief earlier tweeted that the EU had exported some 77 million doses to 33 countries since December,

Her comments came a day after the EU issued a joint statement with the UK in which both sides pledged to work together after weeks of tensions over the Oxford-AstraZeneca jab.

Meanwhile, French President Emmanuel Macron backed the EU's export controls and said the summit marked "the end of naivety" from the bloc.

"I support the fact that we must block all exports for as long as some drug companies don't respect their commitments with Europeans," he said.

Mr Macron earlier expressed frustration at the slow pace of much of Europe's vaccine rollout. "We didn't shoot for the stars," he told the Greek television channel ERT before the summit. "We were wrong to lack ambition."

German Chancellor Angela Merkel also said the EU "not only supplies itself, but also exports to the world - in contrast to the US and Great Britain".

Dutch Prime Minister Mark Rutte said while his fellow leaders had found the Commission's tougher export measures "acceptable", he hoped they would never be used - a message echoed by his Belgian counterpart, Alexander De Croo.

Both those two countries are home to factories involved in the production of the AstraZeneca shot, which it's suggested may soon be sending increased supplies to European nations - a move that may assuage some EU anger, BBC Brussels correspondent Nick Beake reports.

It's what's known as an EU fudge.

With vaccine supplies still low and Covid infection rates soaring in much of mainland Europe, EU leaders wanted to be seen to be taking action at their summit. But they stopped short of explicitly backing controversial proposals by the European Commission to expand vaccine exports that could have applied to the UK.

The tougher restrictions are now at EU leaders' disposal - in theory.

But in practice, leader after leader has said they would rather not use them. Belgium Prime Minister Alexander De Croo described them an option of last resort. The German Chancellor Angela Merkel said it was important to protect global supply chains. Meanwhile, Mark Rutte, the Dutch Prime Minister, said an agreement with the UK over components of AstraZeneca jabs produced at a site in the Netherlands could be announced this weekend

What else happened on Thursday?
Following the virtual summit, the EU's 27 member states agreed to try and ramp up the production of vaccines within the bloc.

"Accelerating the production, delivery and deployment of vaccines remains essential and urgent to overcome the crisis. Efforts to this end must be further intensified," they said in a joint statement.

"We underline the importance of transparency as well as of the use of export authorisations," they added.

The EU also called on vaccine manufacturers to "ensure predictability of their vaccine production and respect contractual delivery deadlines".

US President Joe Biden also attended the virtual meeting, in an effort to repair ties with the EU after the strained relationship between the bloc and his predecessor, Donald Trump.

Many EU leaders were critical of Mr Trump's decisions to pull the US out of the Paris climate agreement and the Iran nuclear deal.

Ahead of Thursday's meeting, the former president of the European Commission Jean Claude Juncker urged the bloc to avoid a "stupid vaccine war" with the UK.

"This cannot be dealt with in a war atmosphere," he told the BBC's Hardtalk programme. "We are not in war, and we are not enemies."

He added that threats of export bans could cause "major reputational damage" to the EU.

How bad is coronavirus in Europe?
A third wave of infections is sweeping across much of mainland Europe.

Yet recent figures show just 12.9 doses of vaccine have been administered per 100 people in the EU compared with 44.7 in the UK and 37.2 in the US.

Speaking earlier this week, German Chancellor Angela Merkel said the British variant had become the dominant strain circulating in Germany and amounted to "a new pandemic".

"The situation is serious," she said. "Case numbers are rising exponentially and intensive care beds are filling up again."

Lockdowns have been re-imposed or extended in countries like Belgium or the Netherlands but there is particular concern over eastern EU states.

Poland will close nurseries, pre-schools and hairdressers for two weeks from Saturday after coronavirus cases surged.