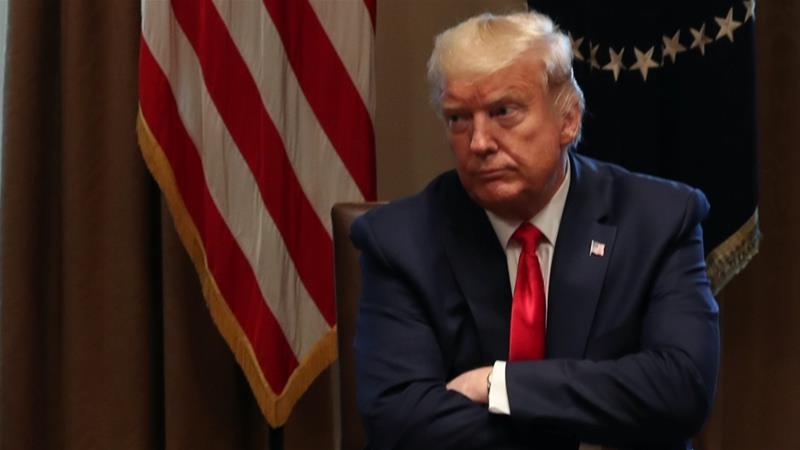 US President Donald Trump has said quarantining New York "will not be necessary", after the state's governor said doing so would be "preposterous".

Mr Trump said the latest decision was taken on the recommendation of the White House Coronavirus Task Force.

The president had earlier said he might impose a quarantine on New York, and parts of New Jersey and Connecticut, to slow the spread of Covid-19.

The state has about half of the total confirmed Covid-19 cases in the entire US.

Mr Trump tweeted that instead of quarantine, a "strong travel advisory" would be issued to New York, New Jersey and Connecticut by the Centers for Disease Control and Prevention (CDC).

The CDC then published a statement urging residents of those three states to "refrain" from all non-essential domestic travel for 14 days.

The agency said the advisory did not apply to "critical infrastructure" service providers, including healthcare professionals and food suppliers.

Speaking to reporters earlier on Saturday about the situation in New York, Mr Trump said: "We'd like to see [it] quarantined because it's a hotspot... I'm thinking about that."

He said it would be aimed at slowing the spread of the virus to other parts of the US.

"They're having problems down in Florida. A lot of New Yorkers are going down. We don't want that," he said.

What did New York's governor say?
New York Governor Andrew Cuomo responded by saying that quarantining the state of New York would be "preposterous" and "anti-American".

"If you said we were geographically restricted from leaving, that would be a lockdown."

He said New York had already implemented "quarantine" measures, such as banning major gatherings and ordering people to remain at home, but that he would oppose any "lockdown" efforts.

"Then we would be Wuhan, China, and that wouldn't make any sense," he told CNN, adding that this would cause the stock market to crash in a way that would make it impossible for the US economy to "recover for months, if not years".

"You would paralyse the financial sector," he said.

He added later: "I don't know how that can be legally enforceable. And from a medical point of view, I don't know what you would be accomplishing.

Mr Cuomo also said he would sue nearby Rhode Island if the authorities there continued targeting New Yorkers and threatening to punish them for failing to quarantine.

On Friday, Rhode Island Governor Gina Raimondo deployed National Guard troops to stop cars with a New York licence plate, to remind them of their state's advice that they quarantine.

Soldiers are going door-to-door in coastal vacation communities to ask if any residents have recently visited New York City.

What's the latest in the US?
With more than 2,000 virus-related fatalities, the US death toll remains lower than those in Italy and China. But there are virus hotspots in New York, New Orleans, Detroit and Seattle.

Saturday saw the first death in the US of an infant who had tested positive for coronavirus. The baby died in Chicago.

In his press briefing, Mr Cuomo said New York was postponing its presidential primary by almost two months until 23 June as a result of the outbreak.

He also said the apex of the crisis would occur in the next 14 to 21 days.

He added that Mr Trump had approved the construction of four temporary hospitals.

Demand for ventilators has also doubled in the southern state of Louisiana. Governor John Bel Edwards said New Orleans would run out of ventilators by 2 April and possibly run out of hospital beds by 7 April if the number of new infections did not subside.

"It's not some flimsy theory. This is what is going to happen," he said.

Hospitals in New York City are rapidly running out of medical equipment and personal protective gear. More widely, the mayors of most US cities have said they expect massive shortages of critical personal safety equipment in the coming weeks.

On Saturday, Mr Trump watched as the USNS Comfort, a navy hospital ship with 1,000 beds aboard, left for New York from Virginia. It will station itself at a Manhattan pier to deal with the overload of patients that New York expects.

It came after Mr Trump signed a $2.2 trillion (£1.8tr) bailout bill passed by Congress on Friday, the largest fiscal stimulus in US history.