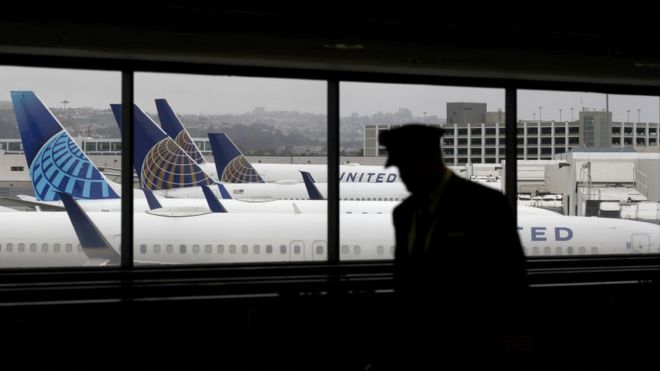 United Airlines says up to 36,000 of its workers could be furloughed due to the coronavirus pandemic.

That amounts to almost half of the company's total US-based frontline workforce.

“Throughout this crisis, we have been honest and direct with you about our need to right-size our workforce to match travel demand,” it said.

The carrier said it expects capacity for this month to be down 75% compared to July last year.

The company also said that not everyone who receives a warning letter will definitely be furloughed, with the final number depending on whether trading conditions improve and how many workers accept offers of redundancy and temporary leave.

“Our primary goal throughout this crisis has been to ensure United - and the jobs it supports - are here when customers are flying again,” United Airlines said in a statement to employees.

In response to the announcement the Association of Flight Attendants-CWA union said: "The United Airlines projected furlough numbers are a gut punch, but they are also the most honest assessment we've seen on the state of the industry.”

The US government has offered $50bn (£40bn) to support the airline industry which has agreed to not lay off staff or cut pay until 30 September.

United Airlines is receiving $5bn of those funds and won't make any cutbacks until 1 October, it said.

Pilar Wolfsteller, Americas Air Transport Editor at FlightGlobal, told the BBC that United's announcement is an indicator of the aviation industry's post-coronavirus future.

"It is the first of the major US airlines to come out and clearly say 'we are going to be a much smaller airline after all of this is over'."

"Now we've got to see what the other airlines will do but we're expecting the industry as a whole is going to shrink and it's probably going to be about a third smaller than it was coming into this crisis," she added.

Last week, American Airlines said it could have 20,000 more front-line workers than it needs to operate, but that not all of them would be furloughed in October.

Airlines globally are in the same situation, with thousands of jobs under threat across the industry.

“We can expect that this crisis will have a long shadow,” said Alexandre de Juniac, director general of the airline trade group AITA. It expects global airlines to lose as much as $84bn this year.

Although airports and airlines have introduced new social distancing measure such as the wearing of masks on flights, many people are still nervous about flying.