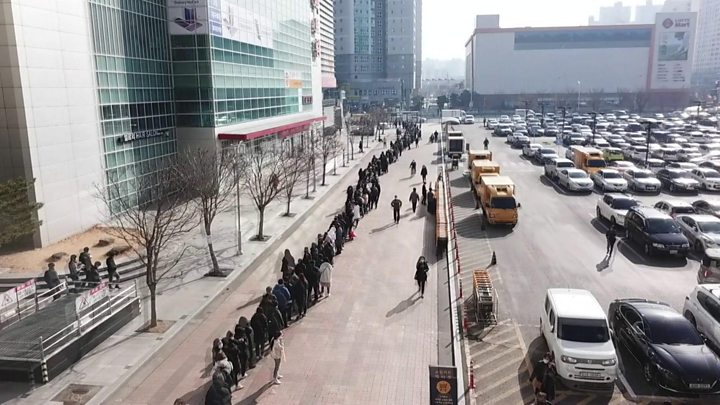 The worst-hit countries are intensifying their efforts to contain the deadly coronavirus as the number of cases globally surpassed 80,000.

In South Korea, infections have risen again, taking the total to 977. Americans have been warned against all but essential travel to the nation.

Italy and Iran are both battling to contain outbreaks of the virus.

In Japan shares slumped on Tuesday, reacting to a global plunge on Monday sparked by fear of further outbreaks.

Wall Street and London had both suffered big drops.

The World Health Organization said on Monday the world should do more to prepare for a possible pandemic - a situation where an infectious disease spreads easily between people in many countries.

The WHO said it was too early to label the outbreak as such, but countries should be "in a phase of preparedness".
More cases of the virus, which causes respiratory disease Covid-19, continue to emerge, with the vast majority still in China. The proportion of infected people who die appears to be between 1% and 2%, although the WHO cautions that the mortality rate is not known yet.

What's the latest from China?

The Chinese government has announced a ban on the consumption of wild animals and a crackdown on the hunting, transportation and trade of prohibited species, state media say.

It is thought that the outbreak originated at a market in the city of Wuhan, Hubei province, selling wild animals.
China also said it would postpone the annual meeting of the National People's Congress next month, to "continue the efforts" against the coronavirus.

On Monday, the country reported 508 new infections, compared with 409 on Sunday. The bulk of the new cases were in Wuhan.

The state-run Global Times reported that scientists had made progress on developing an oral vaccine, with a professor at Tianjin University taking four doses with no side effects.

But experts warn that until full clinical trials have taken place it is unclear how safe or effective the vaccines will be and it could still be months before they can be made widely available.

Hong Kong has extended school closures again, this time up to 20 April.