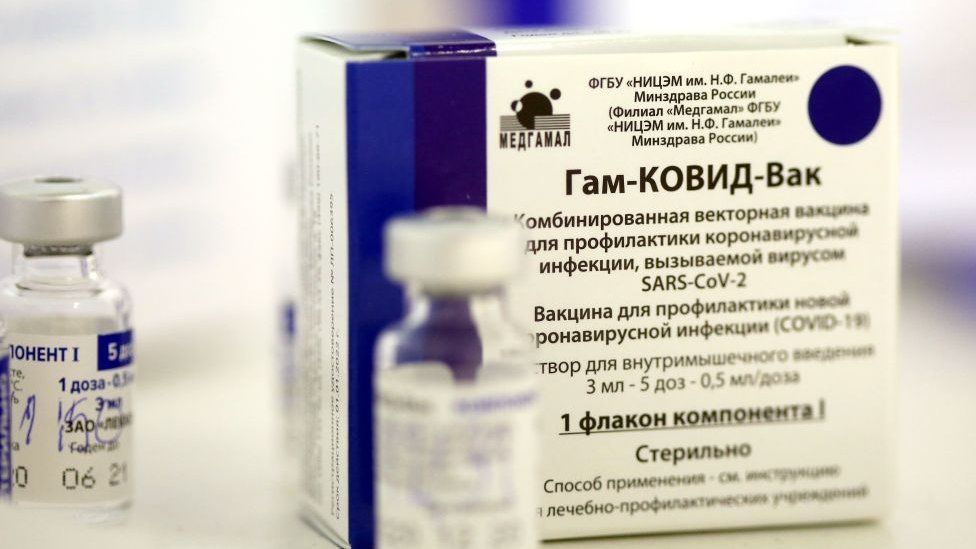 It has also been deemed to be safe - and offer complete protection against hospitalisation and death.

The vaccine was initially met with some controversy after being rolled out before the final trial data had been released.

But scientists said its benefit has now been demonstrated.

It joins the ranks of proven vaccines alongside Pfizer, Oxford/AstraZeneca, Moderna and Janssen.

The Sputnik vaccine works in a similar way to the Oxford/AstraZeneca jab developed in the UK, and the Janssen vaccine developed in Belgium.

It uses a cold-type virus, engineered to be harmless, as a carrier to deliver a small fragment of the coronavirus to the body.

Safely exposing the body to part of the virus's genetic code in this way allows it to recognise the threat and learn to fight it off, without risking becoming ill.

After being vaccinated, the body starts to produce antibodies specially tailored to the coronavirus.

This means the immune system is primed to fight coronavirus when if it encounters it for real.

It can be stored at temperatures of between 2 and 8C degrees (a standard fridge is roughly 3-5C degrees) making it easier to transport and store.

Different second dose
But unlike other similar vaccines, the Sputnik jab uses two slightly different versions of the vaccine for the first and second dose - given 21 days apart.

They both target the coronavirus's distinctive "spike", but use different vectors - the neutralised virus that carries the spike to the body.

The idea is that using two different formulas boosts the immune system even more than using the same version twice - and may give longer-lasting protection.

As well as proving effective, it was also safe with no serious reactions linked to the vaccine during the trial.

Some side effects to a vaccine are expected but these are usually mild, including a sore arm, tiredness and a bit of a temperature.

And there were no deaths or serious illness in the vaccinated group linked to the jab.

As well as Russia, the vaccine is being used in a number of other places including:

Argentina
Palestinian territories
Venezuela
Hungary
UAE
Iran
In a comment published alongside the Lancet paper, Profs Ian Jones and Polly Roy said: "The development of the Sputnik V vaccine has been criticised for unseemly haste, corner cutting, and an absence of transparency.

"But the outcome reported here is clear and the scientific principle of vaccination is demonstrated, which means another vaccine can now join the fight to reduce the incidence of Covid-19".

They pointed out the vaccine had good effect in all age groups, and reduced the seriousness of the disease after one dose.

This was "particularly encouraging" while supply of the vaccine is limited, they added.

The authors of the Lancet paper pointed out the analysis only included symptomatic cases of Covid, and more work would need to be done to understand whether it stops even asymptomatic cases, and prevents the virus from being passed on by vaccinated people.

Dr Julian Tang, a clinical virologist at the University of Leicester, said: "Despite the earlier misgivings about the way this Russian Sputnik V vaccine was rolled out more widely - ahead of sufficient Phase 3 trial data - this approach has been justified to some extent now.

"Such pandemic-related vaccine rollout compromises have, to be fair, been adopted in the UK vaccination programme also - with the extended intervals between the first and second doses.

"So we should be more careful about being overly critical about other countries' vaccine designs."