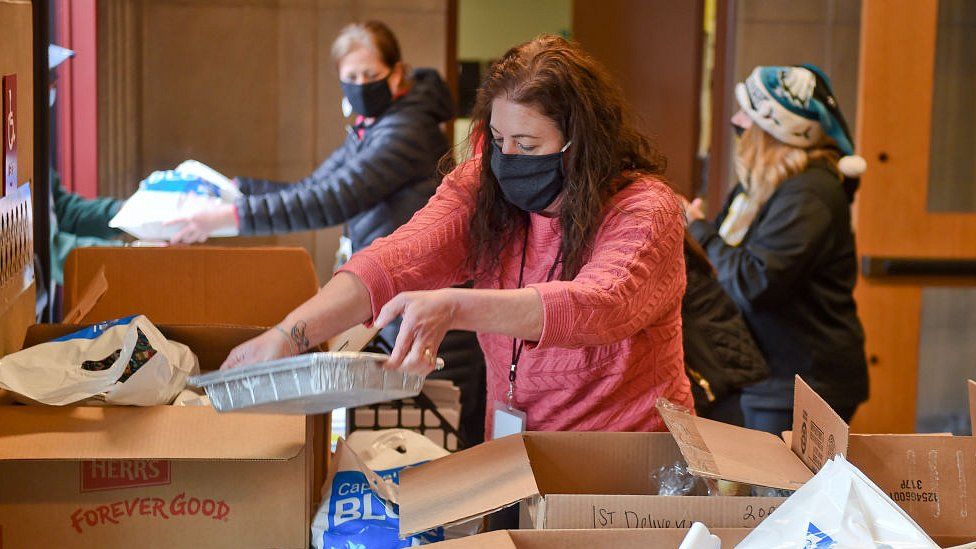 US President Donald Trump has signed into law a coronavirus relief and spending package bill, averting a partial government shutdown.

Mr Trump had initially refused to sign the bill, saying he wanted to give people bigger one-off payments.

The relief package worth $900bn (£665bn) was approved by Congress after months of negotiation.

It is part of a $2.3tn spending package that includes $1.4tn for normal federal government spending.

Had Mr Trump not signed the bill into law by midnight on Monday, a partial government shutdown would have begun unless legislators passed a stopgap bill.

It was not immediately clear why Mr Trump - who is in Florida - finally decided to sign the bill into law. He had been under growing pressure from both sides of Congress.

Mr Trump said he was signing the bill with "a strong message that makes clear to Congress that wasteful items need to be removed".

He leaves office on 20 January after losing November's election to Mr Biden, although he has refused to admit defeat.

Republican Senator Mitt Romney said he was "relieved" that the legislation had at last become law.

US President-elect Joe Biden had warned of "devastating consequences" if Mr Trump continued to refuse to sign.

In a strongly worded statement published on the transition website on Saturday, Mr Biden described Mr Trump's refusal to sign the bill as an "abdication of responsibility".

"It is the day after Christmas, and millions of families don't know if they'll be able to make ends meet because of President Donald Trump's refusal to sign an economic relief bill approved by Congress with an overwhelming and bipartisan majority," Mr Biden said.

What was Trump's position?
The coronavirus aid relief bill - with the larger budget bill rolled in - overwhelmingly passed the House of Representatives and Senate last Monday but, a day later, Mr Trump issued an implied veto threat, describing the package as a "disgrace" full of "wasteful" items.

The bill includes a payment of $600 to Americans earning less than $75,000 a year. Mr Trump said he wanted Americans to receive $2,000 - but Republicans in Congress refused to agree to the change.

Mr Trump also baulked at the annual aid money for other countries in the federal budget, arguing that those funds should instead go to struggling Americans.

His demand to send the measure back to Capitol Hill stunned lawmakers since he had largely stayed out of the negotiations.

His top economic adviser, Treasury Secretary Steven Mnuchin, had proposed the $600 payments early this month, and many questioned why the president had waited so long to object.