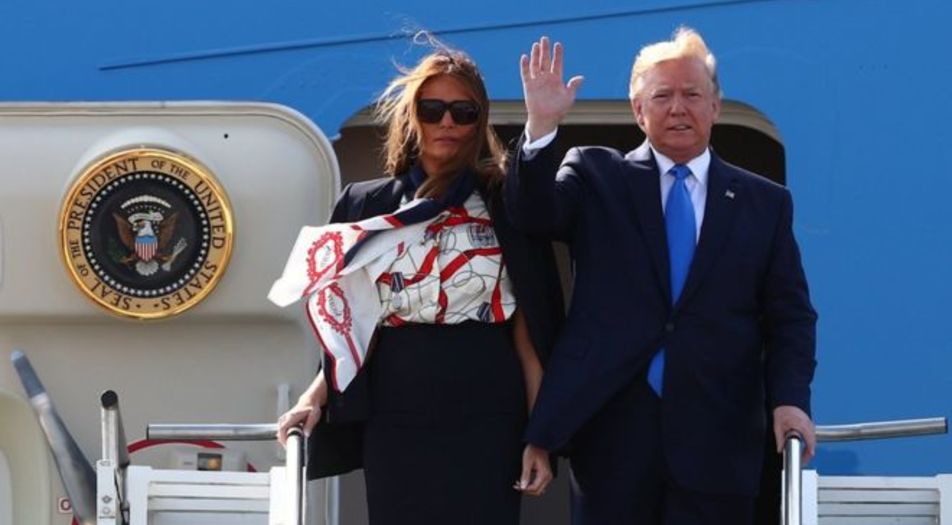 US President Donald Trump and First Lady Melania Trump have arrived in the UK for a three-day state visit.

Mr Trump will meet members of the Royal Family, and is expected to discuss climate change and Chinese technology firm Huawei during talks with outgoing Prime Minister Theresa May.

Minutes before touching down, Mr Trump criticised Mayor of London Sadiq Khan, with whom he has clashed in the past.

He tweeted that Mr Khan - who had earlier said the UK should "not roll out the red carpet" for Mr Trump - was a "stone cold loser", but the president added he was looking forward to his visit.

Protests are planned in several UK cities during the visit, including London, Manchester, Belfast, and Birmingham. Mr Trump was greeted by US Ambassador to the UK Woody Johnson and Foreign Secretary Jeremy Hunt.

Tory leadership candidate Mr Hunt, who has spoken about the importance of the UK's relationship with the US, said Mr Trump mentioned to him "some of his very strong views about the Mayor of London" which he had also tweeted.

Mr Trump's tweet accused Mr Khan of doing a "terrible job" as mayor, adding: "[He] has been foolishly "nasty" to the visiting president of the United States, by far the most important ally of the United Kingdom. He is a stone cold loser who should focus on crime in London, not me."

A spokesman for Mr Khan said "childish insults" should be beneath the US president, adding: "Sadiq is representing the progressive values of London and our country, warning that Donald Trump is the most egregious example of a growing far-right threat around the globe."

Although Mr Trump has spoken of his admiration for Mrs May, there is expected to be differences of opinion during their talks, which begin on Tuesday.

The prime minister will raise the issue of climate change, with a government spokesman again saying on Monday the UK was "disappointed by the US decision to withdraw from the Paris Agreement in 2017".

The two leaders are also expected to discuss Huawei. The US has blacklisted the Chinese firm for security reasons, while the UK may allow it to supply "non-core" components for its 5G network.

Before the visit, President Trump told the Sun newspaper he was backing Conservative Party leadership contender Boris Johnson to be the next UK prime minister.

He also told the Sunday Times that Brexit Party leader Nigel Farage - an arch critic of Mrs May - should be involved in the government's negotiations to leave the EU.

On Monday, the president will be given a tour of Westminster Abbey and will also meet Prince Charles and the Duchess of Cornwall for tea at Clarence House.

In the evening, the Queen will host a state banquet at Buckingham Palace for the president and the First Lady Melania Trump.

The Queen will be joined by the Duke and Duchess of Cambridge. The Duchess of Sussex will not attend following the birth of her son Archie, who is less than a month old.

On Sunday, Mr Trump denied calling the duchess "nasty", despite him using the word on tape.

Hundreds have gathered outside Buckingham Palace to glimpse the arrival of Marine One bringing the president and the first lady for lunch with the Queen and other members of the "firm".

All morning we've had a steady stream of pundits and politicians, journalists and royal watchers clambering their way over the cables to talk to broadcasters from all around the world.

At one point, Lib Dem leader Sir Vince Cable is challenged on his decision not to attend tonight's banquet.

Afterwards, he tells me he'll probably have dinner at home instead: "Maybe fishfingers," he says, chuckling.

As well as the great and the good, the police sniffer dogs have been here too. A busy cute little thing did a good deal of panting around our bag of sandwiches and crisps.

"He quite likes chocolate," said his female handler.

I cannot help wondering what he would make of the lunch about to be served across the road.

At Buckingham Palace, both the president and the Queen are expected to make a speech to guests, which will include prominent Americans living in Britain.

President Trump will be staying at the US ambassador's residence Winfield House, in central London's Regent's Park.

Mr Trump's daughter, Ivanka, arrived in the UK before the president. On Sunday, she posted a picture from outside the Victoria and Albert Museum in west London where she had visited the Christian Dior exhibition.

On Tuesday morning, President Trump and Mrs May will host a business breakfast at St James's Palace.

President Trump will then visit Downing Street for further talks with Mrs May, followed by a joint press conference. Protesters are organising a "national demonstration" which will start at Trafalgar Square at 11:00 on Tuesday.

Both the Stop Trump Coalition and Stand Up to Trump protest groups said they would be present. The Met Police said it had "a very experienced command team" leading the operation to deal with the visit.

The police operation for the president's visit last year was estimated to have cost nearly £18m. On Wednesday, President Trump will visit Portsmouth to mark the 75th anniversary of the D-Day landings.

He will then fly to Shannon, in Ireland, to meet Irish Taoiseach (Prime Minister) Leo Varadkar, before going to his golf course at Doonbeg in County Clare.
Although the Queen has met 12 of the 13 US presidents who have been in office during her reign, Mr Trump's state visit to the UK is only the third by a US leader.

George W Bush and Barack Obama are the only other US presidents to be given a state visit.

State visits differ from official visits and are normally at the invitation of the Queen, who acts on advice from the government. The Queen usually receives one or two heads of state per year and has hosted 112 of these visits since becoming monarch in 1952.