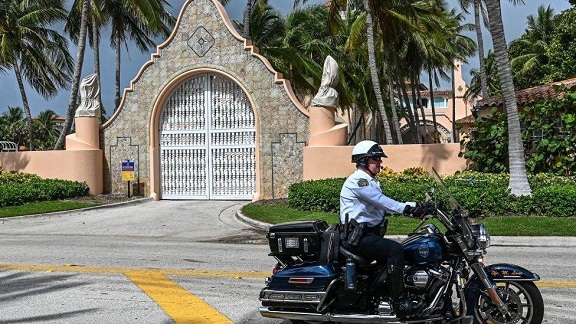 Former US President Donald Trump has said he will not oppose the release of the warrant that let FBI agents search his Mar-a-Lago home earlier this week.

In a statement, Mr Trump said he was encouraging its "immediate release" - but repeated his claim the search was unnecessary and politically motivated.

The US Department of Justice has made a rare request to a Florida court to unseal the warrant.

If granted, it would mean the documents are made available to the public.

And it could confirm the reason for Monday's search of Mr Trump's Florida home - something that the justice department has not yet revealed.

The FBI search is believed to be connected to an investigation into whether the former president removed classified records and sensitive material from the White House.

According to the Washington Post, citing anonymous sources, documents relating to nuclear weapons were among the items FBI agents were looking for at Mar-a-Lago.

The sources did not tell the newspaper whether the information involved US weapons or some other nation's.

Mr Trump had a deadline of 15:00 EST (19:00 GMT) on Friday afternoon to object to the unsealing - but it is not clear what his statement now means for when the documents could be published.

"Not only will I not oppose the release of documents related to the unAmerican, unwarranted, and unnecessary raid and break-in of my home in Palm Beach, Florida, Mar-a-Lago, I am going a step further by ENCOURAGING the immediate release of those documents," the statement read.

He said this was despite them being "drawn up by radical left Democrats and possible future political opponents, who have a strong and powerful vested interest in attacking me, much as they have done for the last six years".

Until now, the justice department has followed its normal practice of remaining silent during an active investigation - and documents such as search warrants traditionally remain sealed during a pending investigation.

But Mr Garland said he was asking a court to make documents connected to the search warrant publicly available, in the public interest.

He said his decision was also influenced by Mr Trump publicly announcing the search had taken place.

"The public's clear and powerful interest in understanding what occurred under these circumstances weighs heavily in favour of unsealing," justice department lawyers said in a motion filed in federal court on Thursday.

Monday's search was the first time in American history that a former president's home has been searched as part of a criminal investigation. Mr Trump and other Republicans have condemned the move as politically motivated.

"I will not stand by silently when their integrity is unfairly attacked," the attorney general told reporters.

He also said the decision to execute the search warrant was not taken lightly. "Where possible it is standard practice to seek less intrusive means," he said.

Earlier, Lindsey Halligan, an attorney for Mr Trump, said his legal team was weighing whether to release the warrant before the judge makes a ruling. They were also considering disclosing photos and video of the search, she said.

FBI agents at Mar-a-Lago had requested that CCTV cameras be switched off, but the Trump team refused to comply, according to CBS News, the BBC's US partner. The dispute over cameras did not involve Mr Trump's Secret Service protection team as the cameras are owned and controlled privately, CBS added.

Mr Trump argued on Thursday on his Truth Social platform that there was no need for the raid since he said his lawyers had been "co-operating fully" and "the government could have had whatever they wanted, if we had it".

He also alleged that the federal agents had rummaged through former First Lady Melania Trump's closet and personal items.