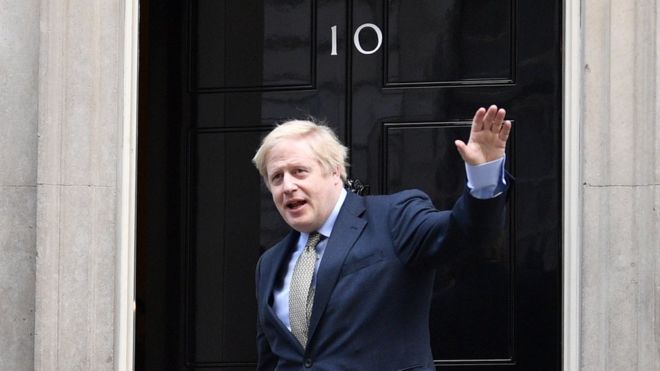 With a substantial majority in Parliament, Boris Johnson can push ahead with his plans, confident that MPs will back them. So, what's in the prime minister's in-tray as he returns to work in Downing Street?
Shares

1. Get Brexit done... and trade agreed

The PM has a series of promises to keep.

Firstly, to leave the EU on 31 January.

He now has the majority in Parliament to push the necessary legislation through, so there's no reason to think that won't happen on schedule.

But Mr Johnson then has to negotiateÂ an "ambitious" trade agreement with the EUÂ extremely quickly.

The PM has to get it ratified before the end of the post-Brexit transition period on 31 December 2020. This is the time between the UK leaving the EU with a deal and finally quitting it altogether under the terms of a new relationship.

He has guaranteed that the transition period will not be extended - creating a potential crunch point, in just over a year's time.

This will be far more difficult to achieve, especially if Mr Johnson wants to diverge from the EU rules and regulations that the UK currently follows.

Finally, Mr Johnson has promised that after the transition period there will be no checks on goods moving within the UK between Great Britain and Northern Ireland. The problem is that's exactly what his own withdrawal agreement creates.

Anyone hoping to hear no more about Brexit after the end of January is likely to be disappointed.

2. Meet growing demands on the NHS

In their manifesto, the Conservatives - like all the main parties - promised extra funding for the NHS. Among other things, this would mean tens of thousands of extra nurses and about 50 million more GP surgery appointments a year.

But many health leaders felt these pledges did not go nearly far enough to address a fundamental problem - demand for patient care is rising relentlessly, but NHS resources and staff levels just haven't kept up.

Closing that gap will need time and money, but to actually bring down waiting lists and modernise services will require still more.

Training enough new staff and getting them into clinical roles could take several years. So there is a lot for the PM to face up to.

Big decisions on funding and workforce planning will have to be made quickly to ensure adequate care is available in future years.

Then there is the immediate challenge of the next few months and a potentially very difficult winter for the NHS, with increased pressures because of flu and other winter ailments.

Finding a solution toÂ the crisis facing the care systemÂ that supports older and disabled people should be near the top of Boris Johnson's to-do list.

He's promised cross-party talks within 100 days, but it is worth noting that it is more than 1,000 days since the Conservatives first promised to fix this overstretched, underfunded, yet vital system.

This is after more than 20 years during which successive governments have failed to reform adult social care.

Â
Source: NHS Digital, between 2014 and 2015 there were changes to the methodology, meaning figures are not directly comparable.

The "clear plan" the prime minister promised in July has not materialised, but his guiding principle is that no-one will have to sell their home to pay for care.

There will beÂ an extra Â£1bn a year for the next five yearsÂ to prop up the current system. However, it will be shared with equally stretched children's social care.

Headache number one is climate change.

Campaign group Friends of the Earth says the UK will be "humiliated"Â if it hosts the summit without setting out how it will meet its own carbon targets in advance.

The UK's advisory committee on climate change, made up of politicians, climate scientists and others, warns thatÂ tens of millions of homes must be insulated soon.

Other experts say large-scale road and airport buildingÂ are not compatible with cutting emissions of carbon dioxide, which scientists say is the major cause of global heating.

They say this is also the caseÂ even if cars are fully electric. And they recommend thatÂ people should be helped to walk and cycle.

The Conservative manifesto had comparatively little to say on these issues.

The USA has said it won't have climate change even mentioned in any trade deal. Meanwhile the EU is putting a border tax on countries that don't cut greenhouse gases. It will be very hard to please both.

Last, but not least, is the state of nature. In October 2019, the Conservative governmentÂ published a radical environment bill,Â setting firm targets for conservation - against the wish of the Treasury.

The bill failed to complete its passage through Parliament before the election was called. Will it survive and be reintroduced into Parliament in the new term?

There are three big questions hanging over the easy-to-repeat sloganÂ of an "Australian-style points-based system".Â This ranks migrant workers according to their skills and abilities.

First, can it really be introduced by the deadline the Conservatives have set of January 2021?

The scale of the policy, legal aspects and staffing challenges ahead to make this happen are enormous - and government is a graveyard of failed IT projects.

Secondly, can anyone be sure the final scheme will look like the one being promised?

Nations the UK hopes to strike trade deals with may demand preferential access for their citizens. Specific sectors of the economy - such as social care - may be allowed to bring in as many workers as they can find to ease chronic staffing crises.

Finally, what will be its impact on net migration?

Boris Johnson says it will fallÂ - but it's hard to see how he can deliver that. This is especially so as he's also promising no cap on skilled workers, or in other sectors, like hotels and construction.

In other words - we simply don't know what the government will deliver, what the system's impact will be - and whether leaving the EU and implementing it will make a jot of difference to the overall numbers.