Gunman kills 39 at nightclub in Turkey 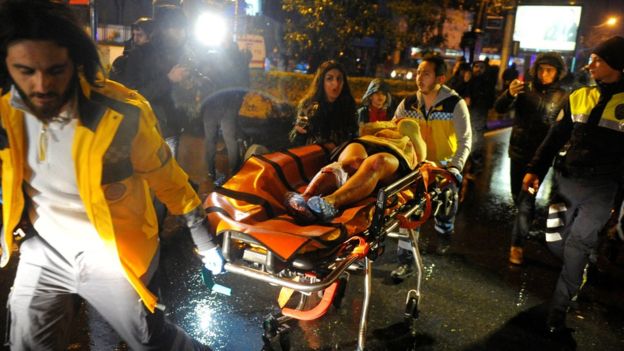 At least 39 people, including at least 15 foreigners, have been killed in an attack on a nightclub in Istanbul, Turkey’s interior minister says.

A gunman opened fire in Reina nightclub at about 01:30 local time (22:30 GMT), as revellers marked the new year.

Suleyman Soylu said efforts were continuing to find the attacker, who was believed to have acted alone.

At least 69 people were being treated in hospital, the minister added. Four were said to be in a serious condition.

Turkish President Recep Tayyip Erdogan said the attackers were trying to “create chaos” and pledged to “fight to the end” against terrorism.

Addressing reporters early on Sunday, Mr Soylu said: “This was a massacre, a truly inhuman savagery.”

“A manhunt for the terrorist is under way. Police have launched operations. We hope the attacker will be captured soon.”

Only 21 of the victims had been identified, he said. Fifteen or 16 were foreigners, he said, and at least three of the Turkish victims may have been employees at the club.

Several hours later, Israel confirmed one of its citizens, 19-year-old Leanne Nasser, was among the dead.