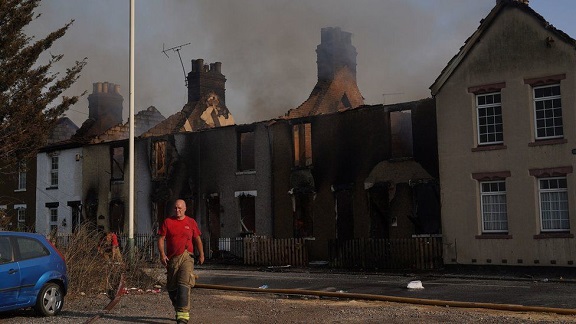 The UK has recorded temperatures of over 40C (104F) for the first time.

Thermometers hit 40.3C at Coningsby in Lincolnshire, while 33 other locations went past the UK's previous highest temperature of 38.7C, set in 2019.

Some rail services were cancelled after tracks overheated or buckled and overhead cables failed.

Hundreds of firefighters tackled fires across London, including in Wennington, where a grass fire spread to properties.

Residents, who had to be evacuated, told the BBC about eight homes and possibly a local church had been destroyed in the fire, while one firefighter at the scene described it as "absolute hell".

Tim Stark, who alerted the fire brigade and whose own house was destroyed in the blaze, told BBC 5 Live he and his son had spotted the fire in his neighbour's garden but despite their best efforts with a hose and watering can, had been unable to stop it spreading amid the dry conditions.

"I reckon about 15-20 houses might be gone, or uninhabitable," he said.

"My house is completely gone, as is the next door neighbour's and three or four other houses along that bit."

There have also been fires elsewhere in the country with major incidents declared in Leicestershire, East, North and South Yorkshire and Lincolnshire, Hertfordshire, Suffolk and Norfolk.

Home Secretary Priti Patel said she had been updated on the "dangerous fires" and urged the public to follow safety advice from their local fire service.

In the capital, people were urged not to have barbecues or bonfires and to be careful when disposing of cigarettes.

Two people were taken to hospital to be treated for smoke inhalation after a fire in Dagenham, east London, while further north a nursery was caught in a blaze in Milton Keynes.

London Fire Brigade assistant commissioner Jonathan Smith said some of the fires in the city were the result of "tinderbox" conditions and said Tuesday evening would be "critical" in ensuring the fires were kept under control.

"It would be premature to say we are out the other end of this incident," he added. 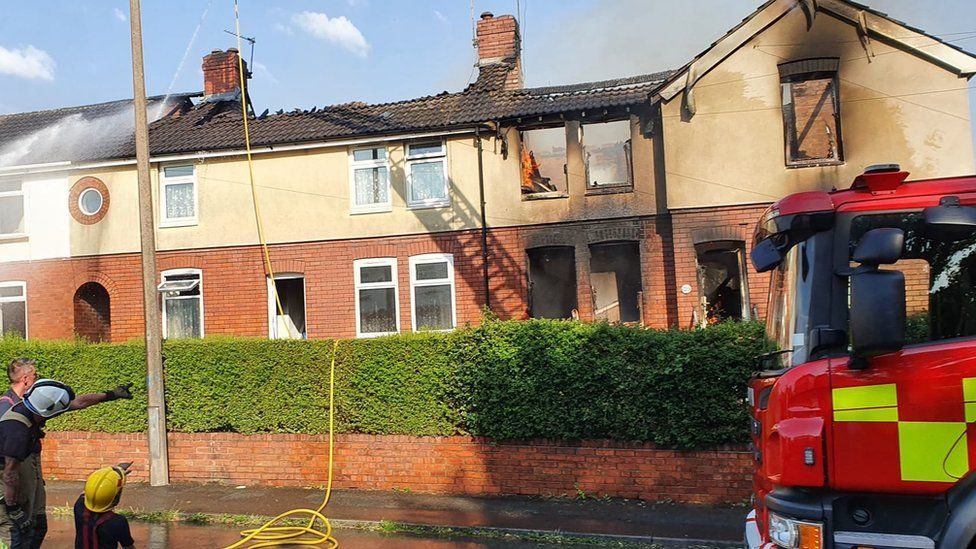 Heathrow Airport was the first place to break the 40C mark, hitting 40.2C at 12:50 BST but several other places also passed 40C during the afternoon, including Gringley on the Hill in Nottinghamshire and St James's Park, Kew Gardens and Northolt - all in London.

A large swathe of eastern England, from Surrey to South Yorkshire, saw temperatures between 39C and 40C, and at least 34 weather stations exceeded the previous UK temperature record.

Scotland also saw a new record, according to provisional Met Office figures, with 34.8C recorded at Charterhall, in the Scottish borders - beating the previous record of 32.9C recorded in 2003.

In Wales, Hawarden in Flintshire registered 36.2C, provisionally the second highest temperature on record in Wales, but below Monday's 37.1C.

Met Office chief of science and technology Prof Stephen Belcher said exceeding 40C was "virtually impossible" in an undisrupted climate, but due to climate change "driven by greenhouse gasses" such extreme temperatures had become a reality.

He said if there continued to be high emissions "we could see temperatures like this every three years".

The two days of extreme temperatures prompted the Met Office to issue a red extreme heat warning for the first time, which expires at midnight on Tuesday.

The hot weather has begun to give way, with rain beginning to fall in several parts of the country and cooler temperatures expected on Wednesday.

Warnings were also issued for people to be careful around water after at least five people died in and around water over the past two days.

The body of a teenage boy who went missing on Monday was recovered from the River Thames in Richmond, west London, on Tuesday afternoon, the Metropolitan Police said.

Amid the extreme heat Network Rail had warned against travel, road surfaces have warped, and a number of power cuts were reported.

Rail services on Wednesday morning could continue to face some disruption as problems are fixed, and several rail companies have warned of a knock-on impact on services.

The extreme warning, indicating a threat to life, covers an area stretching between London, Manchester and York.

There was a markedly cooler outlook for Penzance, Cornwall, where thundery storms hit the popular holiday destination during the morning.

And across the country, the heatwave is forecast to come to a sudden end with cooler weather expected on Wednesday and thunderstorms forecast for parts of the east and north-east of England.

Provisional figures showed the UK experienced the warmest night on record from Monday into Tuesday.

Emley Moor in West Yorkshire is likely to have broken that record, where 25.9C was recorded overnight, according to the Met Office. 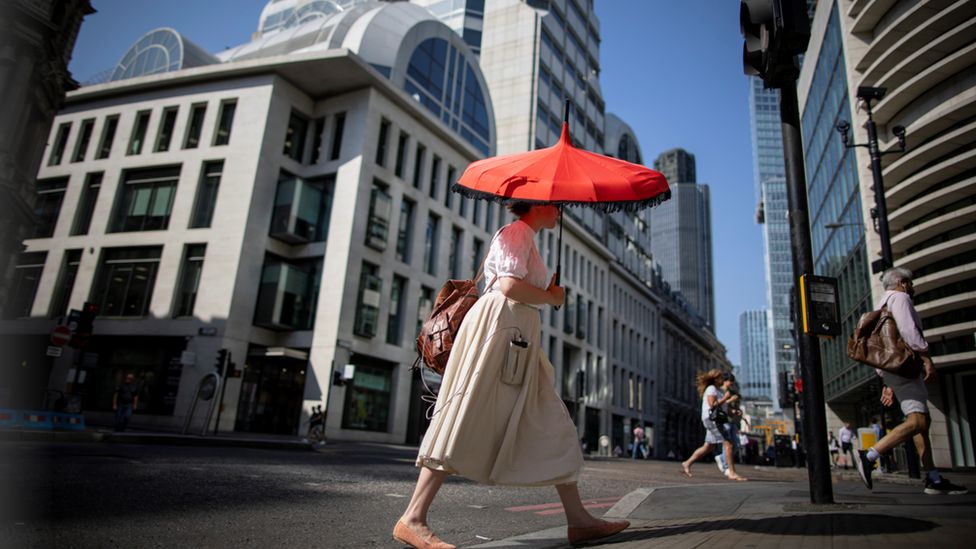 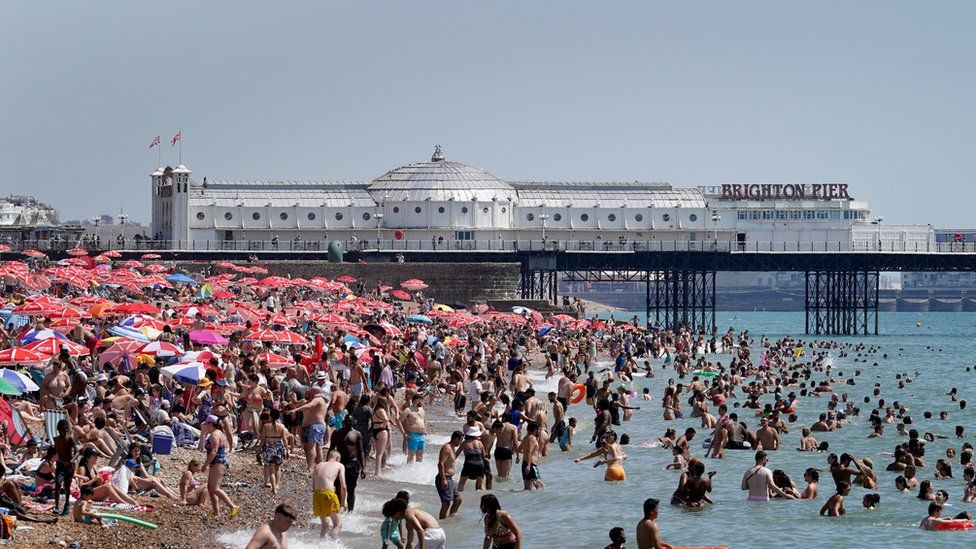 People flocked to the beach at Brighton