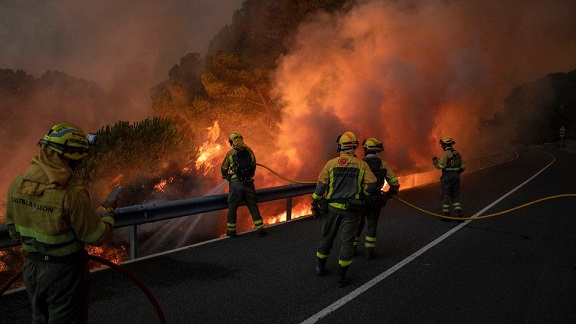 Heat records tumbled and firefighters faced new blazes as much of Western Europe baked in a gruelling heatwave.

The UK, normally used to milder climates, saw temperatures of more than 40C (104F) for the first time.

Germany saw its hottest day of the year so far while Portugal raised its death toll after days of excess heat.

Deadly wildfires have swept the continent. The UN's World Meteorological Organization (WMO) warned there was worse to come.

Heatwaves have become more frequent and more intense, and last longer because of human-induced climate change.

"In the future these kinds of heatwaves are going to be normal, and we will see even stronger extremes," WMO chief Peterri Taalas said.

In addition to record temperatures in the UK, several fire services declared major incidents after a surge in fires.

A major blaze in Wennington, east London, set homes alight. Residents who had to be evacuated told the BBC that some eight homes and possibly a local church had been destroyed in the fire, while a firefighter at the scene described it as "absolute hell".

Although the all-time high for mainland France has not been topped, the south-west of the country has experienced its biggest wildfires in more than 30 years. Since 12 July, fires have engulfed more than 20,300 hectares (49,400 acres) of the wine-growing Gironde region.

Nearly 37,000 people had to be evacuated from their homes.

Cooler weather has now returned to the UK and France. 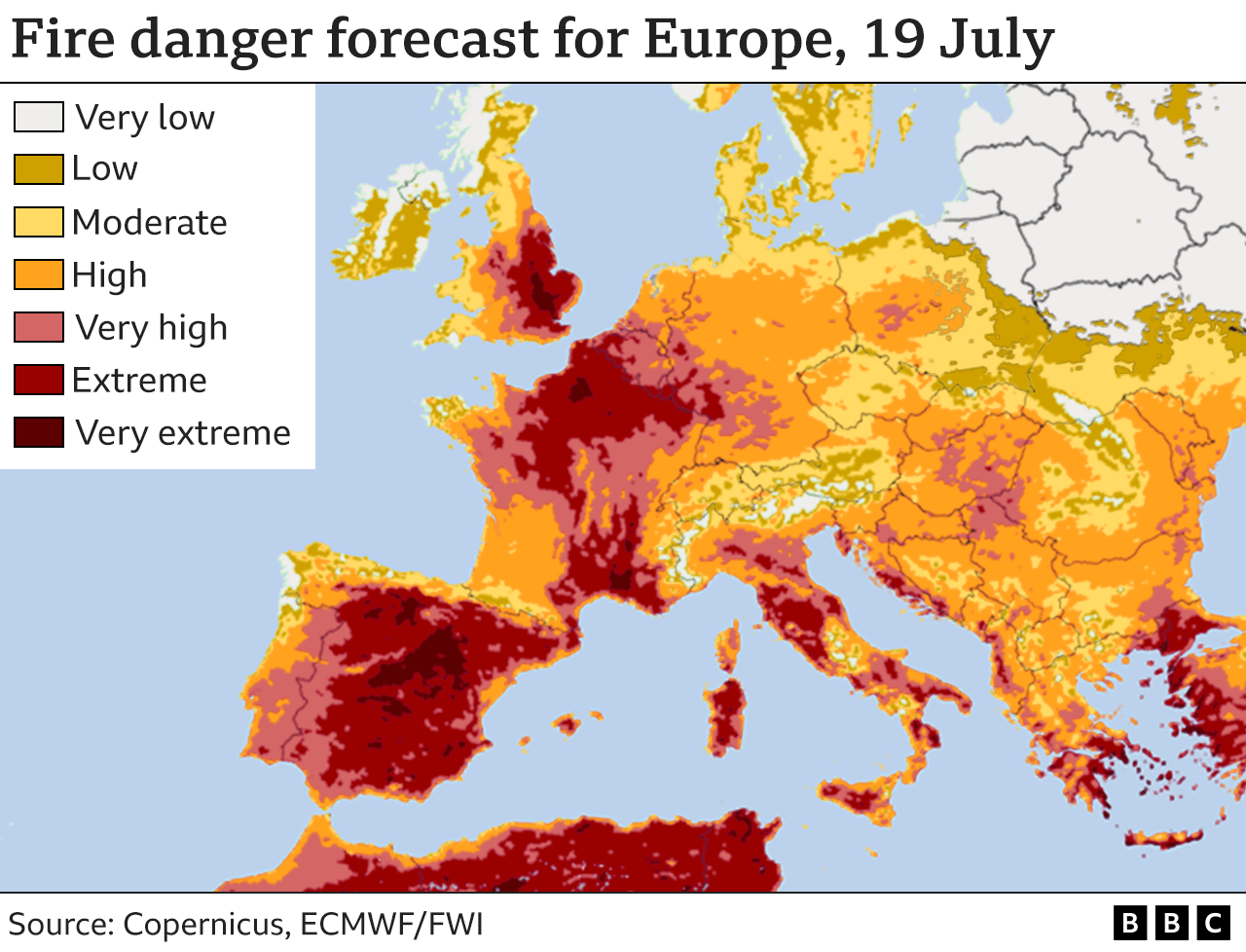 In Belgium, a fire broke out in dunes at the Belgian resort of De Haan, setting several vehicles alight. But following the ferocious heat, the country is now bracing itself for thunderstorms that could lead to 20-30mm of rain in some region, Le Soir newspaper reports.

Weather warnings are still in place in Germany as the heatwave continues to move north and east.

On Tuesday, the country experienced its hottest day of 2022. The national weather service recorded 39.5C in the western city of Duisburg. The Netherlands also reached the same high of 39.5C in Maastricht, forecasters said.

Temperatures in Portugal have decreased significantly. However, more than 1,000 heatwave-related deaths have been recorded since last week.

Wildfires have become a common consequence of these extreme temperatures across Europe.

Central and north-western Spain has also been ravaged by wildfires.

The Copernicus monitoring service - part of the EU's Earth observation programme - said total carbon emissions from wildfires between June and July are the highest seen in Spain for the period since 2003.

In Greece, a wildfire fuelled by gale-force winds raged on the mountainous region of Penteli, near Athens. It has damaged homes and and prompted local authorities to evacuate at least four areas and a hospital.

Forecasters in Italy are warning of temperatures as high as 40-42C between Wednesday and Friday.

Several wildfires have already been reported in the country, and blazes that broke out on Monday evening in Tuscany were still raging on Tuesday afternoon.