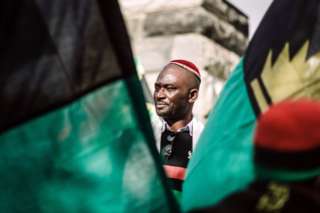 State governors in south-eastern Nigeria have announced they will create a joint force code-named Ebube Agu (Igbo for "Incredible Tigers") to help tackle rising insecurity in the region.

In a statement at the end of a security meeting on Sunday, the governors said the new force would help co-ordinate security activities in the area.

More than 15 policemen were killed while nearly 2,000 inmates were released in a recent jailbreak in Imo state.

The separatist group, the Indigenous People of Biafra (Ipob), has been active in the region, fighting to establish a separate state.

The governors also announced a ban on open grazing.

Local farmers and cattle herders have had running battles in many communities over grazing rights.

The south-east governors are the second group to set up a regional security force following mounting security challenges.

Last year the south-west part of Nigeria set up a regional force called amotekun, which is the Yoruba word for leopard.