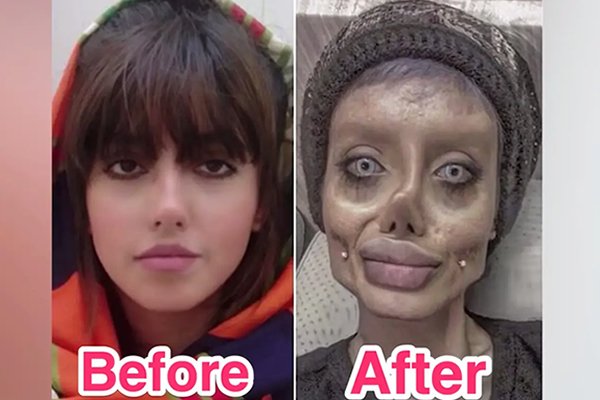 An Iranian Instagram star famous for her radical appearance and cosmetic surgery has been arrested for blasphemy by the Tehran Prosecutorâ€™s Office, according to the countryâ€™s semi-official Tasnim News agency.

Tasnim News said the influencer, who goes by Sahar Tabar on Instagram but was identified as Fatemeh Kh by Iranian media, using the first character of her surname in Farsi, is accused of promoting violence, illicit education, blasphemy, insulting the Islamic veil, spreading hatred and encouraging youth to commit corruption.

Tasnim reported that complaints were made about her to the prosecutorâ€™s office.

On Instagram â€” where her account has since been deactivated â€” Sahar Tabar regularly posted photos of herself. Many believe she made herself up to look like a zombie version of the actress Angelina Jolie, with sunken cheeks, an exaggeratedly upturned nose and extra-large pouty lips.

In some pictures, she also boasts a white plaster on her nose, reminiscent of the ones worn by plastic surgery patients.

Sahar Tabar became a minor viral sensation in 2017, when several media outlets published stories about her, claiming that she had undergone more than 50 cosmetic surgeries and weighed only 40 kilos (88 pounds).

In an interview with Russian news agency Sputnik, published in December 2017, she debunked most of the claims made about her.

â€œIt is Photoshop and makeup,â€ she told Sputnik. â€œEvery time I publish a photo I make my face more fun. It is my way of self-expression, a kind of art. My followers know that this is not my real face.â€

She went on to say that she had only had a handful of procedures â€” including enlarging her nose and lips and liposuction â€” and her weight was in a normal range. â€œI was trying to lose weight, that is true. But I only lost 5-7 kilograms, not 40 or even 30. Now I weigh 54 kg (119 pounds),â€ she said.

In 2018, an Iranian teenager was detained for posting videos of herself dancing to Western music on Instagram.

Amnesty International reports that her â€œforced confessionâ€ was broadcast on state TV.

In 2014, six people were arrested for dancing in a YouTube video to the Pharrell Williams song â€œHappy.â€ They were later freed after humanitarian groups launched an international campaign against their arrest. Williams himself voiced his support for the dancers.

This July, an Australian couple were arrested, accused of having taken illegal photos with a drone. They have since been released.