Joe Biden's son confirms he is under federal investigation 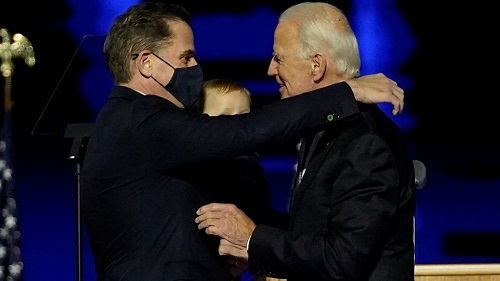 Federal prosecutors have been investigating Hunter Biden, President-elect Joe Biden’s son, to determine if he failed to report income from China-related business deals, according to people familiar with the matter — a politically explosive probe that is likely to challenge the Justice Department in the incoming administration.

The investigation into the president-elect’s son began in 2018, though little could be learned immediately about what, if any, wrongdoing it had found. The existence of a tax investigation was confirmed Wednesday by Hunter Biden in a statement saying he had just been advised of it.

According to a person familiar with the matter, who like others spoke on the condition of anonymity to discuss an ongoing and politically sensitive investigation, FBI agents had been seeking to talk to Hunter Biden as part of the case on Tuesday — though an interview has not yet been scheduled or taken place — as well as serve subpoenas on Hunter Biden and his associates.

“I learned yesterday for the first time that the U.S. attorney’s office in Delaware advised my legal counsel, also yesterday, that they are investigating my tax affairs,” Hunter Biden said in a statement. “I take this matter very seriously but I am confident that a professional and objective review of these matters will demonstrate that I handled my affairs legally and appropriately, including with the benefit of professional tax advisors.”

Hunter Biden’s attorney, George Mesires, did not respond to requests for additional information about the case.

Biden is giving most-coveted jobs to those he knows well. That may help Doug Jones get Justice.

“President-elect Biden is deeply proud of his son, who has fought through difficult challenges, including the vicious personal attacks of recent months, only to emerge stronger,” the Biden transition team wrote in a statement.

Although the investigation has been ongoing for some time, it is unclear how far along prosecutors consider themselves toward building a criminal case or closing the matter. The subject of an investigation typically is interviewed when prosecutors have amassed a good deal of evidence — though prosecutors seeking to serve subpoenas as recently as this week suggests there is more investigative work to be done.

A person familiar with the case said that the investigation continued during the election year but that agents took care not to take overt investigative steps as voting neared that would have made it more widely known. Those precautions, the person said, became unnecessary once the election was over.

If the investigation is continuing when Joe Biden takes office, it will mark a major test for him and his attorney general. Democrats have criticized the Justice Department, alleging it has lost its historical independence from the White House during the Trump administration, as Attorney General William P. Barr has intervened in cases to the benefit of President Trump’s friends, and Joe Biden’s incoming chief of staff has said the president-elect will not tell the Justice Department whom to investigate or not.

The president-elect has not yet chosen a nominee to lead the Justice Department, and whoever he chooses will probably be pressed to make public assurances about how they will oversee an investigation of the president’s son.

Trump on Wednesday night tweeted a claim about voters changing their minds “if they knew about Hunter Biden” and added, falsely, “But I won anyway!”

Hunter Biden’s foreign business ventures have long dogged his father’s political life, as Republicans have alleged they presented conflicts of interest for the elder Biden.

Trump and his GOP allies targeted Hunter Biden throughout the presidential campaign, specifically his work for a Ukrainian gas company while his father was vice president, as well as his China-related business affairs. Trump invited a former business associate of Hunter Biden to attend the final presidential debate, and in a staged event beforehand, the associate discussed a deal involving a Chinese company.

The associate, Tony Bobulinski, alleged that in May 2017 he met with Joe Biden and his son, as well as Joe Biden’s brother Jim to discuss a joint venture with the Chinese energy firm CEFC. That was after Joe Biden had left public office, and it was far from clear he would again run in 2020. But Bobulinski appeared to be disputing Joe Biden’s assertion that he had never discussed foreign business dealings with his son.

A Joe Biden spokesman said at the time: “Joe Biden has never even considered being involved in business with his family, nor in any overseas business whatsoever.”

Bobulinski told Sinclair Broadcast Group in October that he had been interviewed for five hours by the FBI.

A Joe Biden spokesman has previously defended the elder Biden’s actions with respect to foreign policy in Ukraine, asserting that Joe Biden “carried out the Obama-Biden administration’s policies without regard to any interests other than the public’s and neither discussed this with his son nor was involved in any way with his son’s private business pursuits.”

“This is why AG Barr needs to appoint a Special Counsel to investigate Hunter Biden,” he tweeted. “It would be wildly inappropriate if his dad’s AG was involved in this matter.”

If Barr does not appoint a special counsel, Joe Biden’s attorney general could face pressure to do so, to help ensure the probe’s independence.

Any special counsel would still answer to the attorney general. Another possibility would be for the current Delaware U.S. attorney to remain in that job to continue the Hunter Biden investigation. In 2001, the Bush administration kept Manhattan U.S. Attorney Mary Jo White in that post to continue an investigation of pardons issued by outgoing President Bill Clinton.

A person familiar with the Hunter Biden investigation said it “is not connected to the attacks the Trump campaign and their allies made against Hunter during the campaign.”

A federal investigation of Hunter Biden was first hinted at in October, when it became public that federal authorities had issued a subpoena for a computer and hard drive belonging to him. The subpoena was released as Trump’s personal attorney Rudolph W. Giuliani and his former top adviser Stephen K. Bannon were seeking to draw attention to private materials of Hunter Biden that they had obtained.

The subpoena, which was dated December 2019, was directed to the owner of a Wilmington, Del., computer repair shop, who said the laptop had been brought to his store by a customer — almost certainly Hunter Biden, he claimed — in April 2019.

The shop owner, John Paul MacIsaac, told The Washington Post in October that he had tried to get in touch with Hunter Biden unsuccessfully, and after he saw some of the laptop’s contents, he contacted the FBI through an intermediary. He said the agents initially told him they didn’t want to take possession of the hard drive and instead made a copy of it, but returned later in the year with a subpoena to take it.

The subpoena — a copy of which was published by Fox News — suggested a money-laundering investigation, though exactly what it was looking for or had found was unclear at the time.

A Justice Department spokeswoman declined to comment Wednesday. Kim Reeves, a spokeswoman for the U.S. attorney’s office in Delaware, said: “Per DOJ policy, we cannot comment on an ongoing investigation.”