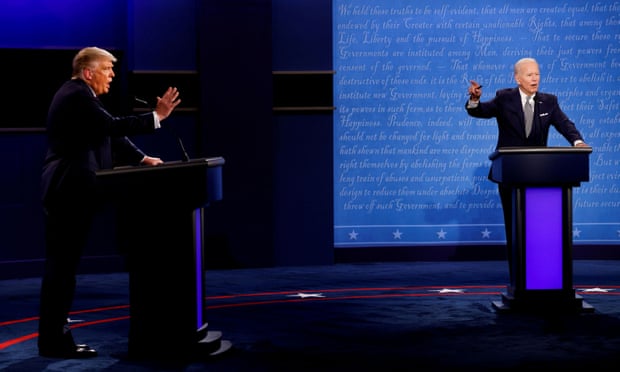 When Donald Trump and Joe Biden face off on Thursday for a final televised debate, each candidate will have their microphones cut off while the other is delivering responses to questions.

The 90-minute debate is divided into six 15-minute segments, with each candidate granted two minutes to deliver uninterrupted remarks before proceeding to an open debate.

The non-partisan Commission on Presidential Debates (CPD) on Monday announced that “in order to enforce this agreed upon rule, the only candidate whose microphone will be open during these two-minute periods is the candidate who has the floor under the rules”. Both mics will be unmuted for open discussion.

The commission added in a statement: “We realize, after discussions with both campaigns, that neither campaign may be totally satisfied with the measures announced today. One may think they go too far, and one may think they do not go far enough. We are comfortable that these actions strike the right balance and that they are in the interest of the American people, for whom these debates are held.”

The Trump campaign voiced objections to the change but said the Republican would still take part in the Thursday night event, one of his last chances to reach a large prime-time audience before voting ends on 3 November.

“President Trump is committed to debating Joe Biden regardless of last-minute rule changes from the biased commission in their latest attempt to provide advantage to their favored candidate,” campaign manager Bill Stepien said.

The Biden campaign did not immediately respond to a request for comment.

The rule change comes after a chaotic first debate on 30 September during which the presidential candidates constantly spoke over each other, with Trump relentlessly interrupting and attacking his Democratic rival.

Trump interjected so frequently that Biden at one point lost his patience and snapped: “Will you shut up, man? This is so unpresidential.”

Republicans and Trump have been critical of the CPD for canceling the second debate due to safety concerns after Trump was diagnosed with Covid-19.

The Trump campaign has also contested the topics of some of the questions the debate moderator, NBC News correspondent Kristen Welker, had chosen for the debate. The topics are American families, race in America, climate change, national security and leadership, but Stepien has claimed the campaigns already agreed foreign policy would be the focus.

A spokesman for Biden replied that the campaigns and debate’s commission has agreed Welker would choose the topics. “The Trump campaign is lying about that now because Donald Trump is afraid to face more questions about his disastrous Covid response,” national press secretary TJ Ducklo said.

“As usual, the president is more concerned with the rules of a debate than he is getting a nation in crisis the help it needs.”

At a recent rally, Trump griped that Welker is “extremely unfair”. He has also tweeted, “She’s always been terrible & unfair, just like most of the Fake News reporters, but I’ll still play the game.”