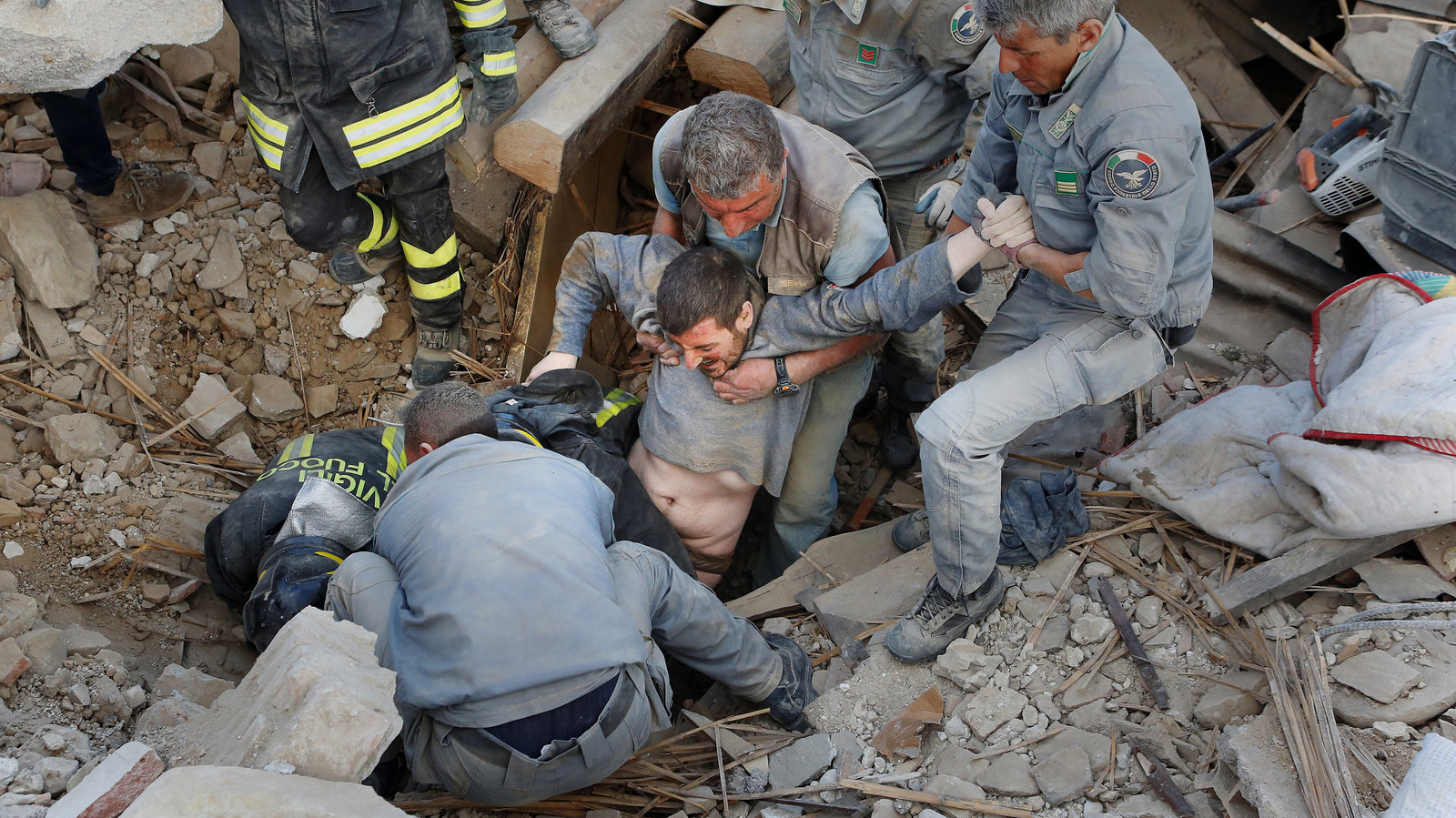 The death toll in the Italian earthquake has risen to at least 247 as thousands of rescuers continue efforts to find survivors.

The search went on through the night, and there was a strong aftershock which rocked already damaged buildings.

More than 4,300 rescuers are using heavy lifting equipment and their bare hands.

Many of the victims were children, the health minister said, and there were warnings the toll could rise further.

The latest death toll was given on Thursday morning - 190 deaths in Rieti province and 57 in neighbouring Ascoli Piceno province.

Rescuers said they had pulled five bodies from the ruins of the Hotel Roma in the historic town of Amatrice. As many as 70 tourists were staying at the hotel when the quake struck. Many are feared to be in the rubble, though several were pulled out and given medical care.

Late on Wednesday there were cheers in the village of Pescara del Tronto when a young girl was pulled alive from the rubble after being trapped for 17 hours. Almost all the houses there had collapsed, the mayor said.

The quake struck small towns and villages in the mountainous area where the regions of Umbria, Lazio and Le Marche meet.

People there spent the night outside or in tents provided by the emergency services.

Among the victims was an 18-month-old toddler, Marisol Piermarini, whose mother Martina Turco survived the deadly 2009 earthquake in L'Aquila and moved away from there after the experience, Italian news agency Ansa reported.

Ms Turco was being treated in hospital after being pulled from the rubble in the village of Arquata del Tronto, Ansa said.

The area has also been shaken by strong aftershocks, including a 4.7-magnitude tremor with its epicentre about 7km east of Norcia, according to the US Geological Survey.

The mayor of Amatrice said three-quarters of the town had been destroyed and no building was safe for habitation.

Many of those affected were on holiday in the region. Some were in Amatrice for a festival to celebrate a famous local speciality - amatriciana bacon and tomato sauce.

The country is no stranger to earthquakes: the 2009 L'Aquila tremor killed more than 300 people and in May 2012 two tremors nine days apart killed more than 20 people in the northern Emilia Romagna region.

Why is Italy at risk of earthquakes? By Jonathan Amos

Earthquakes are an ever-present danger for those who live along the Apennine mountain range in Italy.

Through the centuries thousands have died as a result of tremors equal to, or not much bigger than, the event that struck in the early hours of Wednesday. The modern response, thankfully, has been more robust building and better preparation.

Mediterranean seismicity is driven by the great collision between the African and Eurasian tectonic plates; but when it comes down to the specifics of this latest quake, the details are far more complicated.

The Tyrrhenian Basin, or Sea, which lies to the west of Italy, between the mainland and Sardinia/Corsica, is slowly opening up.

Scientists say this is contributing to extension, or "pull-apart", along the Apennines. This stress is compounded by movement in the east, in the Adriatic.

The result is a major fault system that runs the length of the mountain range with a series of smaller faults that fan off to the sides. The foundations of cities like Perugia and L'Aquila stand on top of it all.